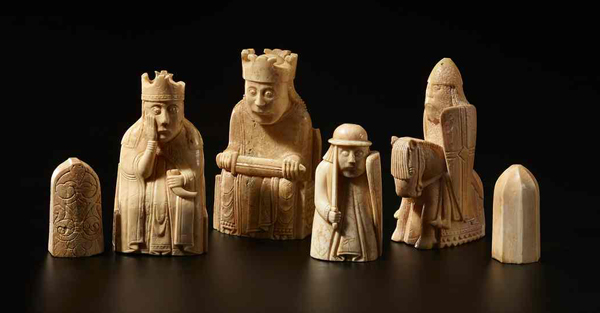 The Lewis chessmen, found on the Isle of Lewis in Scotland, were made of walrus ivory in Norway circa 1150–1175. Photo: National Museum of Australia.

Brigid Delaney, Curated history: how to tell a 2 million-year-old story with one exhibition!, The Guardian, 8 September 2016

A National Museum of Australia exhibition tells the history of the world in 100 objects mostly sourced from the British Museum, ranging from a counterfeit Chelsea shirt to a stone tool that reaches back to the dawn of humanity

The exhibition is billed as “two million years of history in one room”, but Mathew Trinca, director of the National Museum of Australia, describes it simply as “the story of us”.

Sourced from the British Museum with some Antipodean additions, A History of the World in 100 Objects is the National Museum’s spring/summer blockbuster exhibition: a collection of objects that show the span of human history, from early stone tools to Javanese shadow puppets to an HSBC sharia-compliant, no-interest credit card.

It covers all the advances and disruptions in one space: the invention of tools and weapons; currency and cosmetics; the shrinking world of globalisation; the advent of Wi-Fi technology.

Each carefully curated object tells a story about human progress, but to view them all at once is to experience a sort of existential vertigo. In the context of such a tangible and broad sweep of history, it’s impossible to ignore just how small a part we play in the great human project.