You are here: Home » Articles filed under: 'News' » Article: 'Two Nations: A Friendship is Born explores' 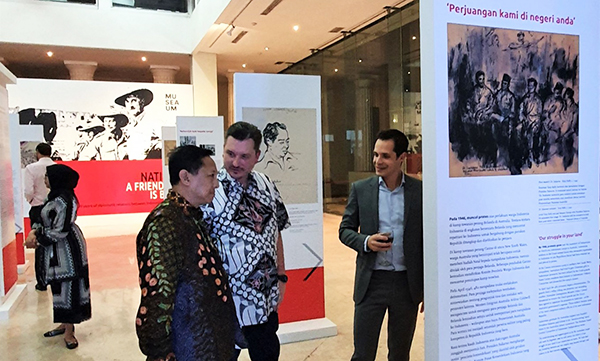 Sharing the past: Attendees at the opening night of “Two Nations: A Friendship is Born” look at a panel depicting Australia’s support for Indonesia’s sovereignty during the 1945 to 1949 period. The exhibition at the National Museum will run until Dec. 14. (JP/Tertiani ZB Simanjuntak).

Back in July 1947 the students of Sydney University organized a demonstration at the Dutch Consulate in the wake of the Dutch armed forces’ “aggression” against Indonesian independence forces.

The protesting students were arrested and made headlines in The Sydney Morning Herald, one of the leading newspapers in Australia. The paper published reports in favor of self-government in Indonesia.

This was one of the forgotten stories uncovered by the Australian National Maritime Museum that showed the strong connection between Australia and Indonesia during the latter’s struggle for international recognition of its sovereignty from 1945-1949.

Titled “Two Nations: A Friendship is Born”, the ongoing exhibition at the National Museum in Central Jakarta showed a collection of news clippings, photographs, sketches and copies of official letters of support from the Australian government and private citizens.

The exhibition highlighted the solidarity of Australian maritime workers who boycotted Dutch vessels at port to stop them from transporting ammunition and other materials to Indonesia.

There was also the story of Molly Warner, a journalist who dedicated her life to the Indonesian revolution and had a pivotal role in spreading news about the young republic to the world. She later became President Sukarno’s English speechwriter and press secretary.

In one of the panels of the exhibition, a newspaper clip, dated September 1945, showed Indonesian seamen holding a demonstration in Wynyard Square in the port city of Sydney. The panel tells a touching story about how locals cried “Merdeka!” (Freedom!) and “Down with the Dutch!” as cargo ship Esperance Bay left port to transport hundreds of Indonesian soldiers home after months in exile.

Maritime Museum director Kevin Sumption said there were books and news articles about Australians’ support for Indonesian sovereignty but they were never united as a single story.

“Six years ago, the museum’s curator Stephen Gapps started to bring all the different parts together and he found the wonderful story of the collaboration and grass-roots support in Australia,” he said at the opening night of the exhibition on Nov. 13.

The touring exhibition will run until Dec. 14 in Jakarta and will later visit Surabaya, East Java; Makassar, South Sulawesi; and Denpasar, Bali. Its opening marked the start of the year-long Australia Connect program to commemorate the 70th anniversary of diplomatic relations between the two countries, which will fall on Dec. 27.

The program will feature various events, including a concert by award-winning singer-songwriter Dan Sultan, Australian Open Tennis and other sports events, a film festival, street art collaboration and a food festival.

While the program will explore Australia and Indonesia’s shared past, present and future, it will also highlight Australia’s indigenous history, culture and diversity.

“We hope this campaign will deepen cultural connections between Australia and Indonesia,” said Australian Ambassador Gary Quinlan, who officiated the opening of the exhibition that marked the launch of Australia Connect.

Quinlan added that he expected cooperation between art schools in both countries to bring the two nations closer.

“It has been included in the comprehensive economic partnership agreement of the two countries,” he said.

Also attending the opening ceremony was Indonesian composer and pianist Ananda Sukarlan whose orchestral work The Voyage to Marege – a musical collaboration with Aboriginal musicians Djakapurra Munyarryun and Kevin Yunipingu in 2017 – was included in the catalog of Australia Connect. Sumption said there had been connections between the Bugis seafarers of South Sulawesi and the aboriginals of northern Australia for centuries.

“There are similarities in their languages and folktales,” he said.

Sumption said maritime relations had been developing for at least four centuries, as suggested by the artwork of the Yolngu community, which inhabited the area.

“Unfortunately, not many people know about this part of the history. I hope this exhibition can strengthen the ties between the people,” he said.