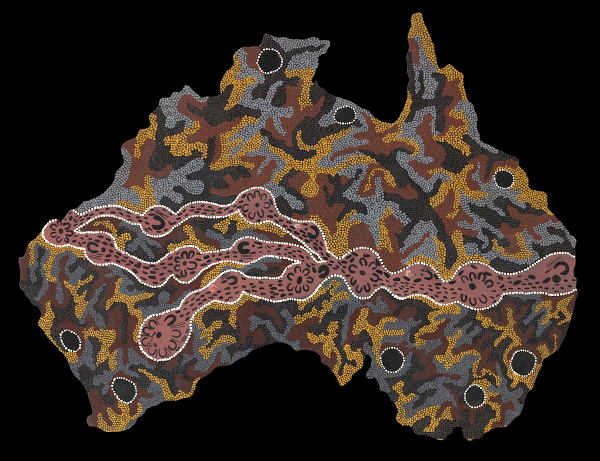 The UK/Australia Season is the largest ever cultural exchange between the two nations, including shell-covered slippers, a 19th-century Indigenous cricket team, and uprising anthems linking Brixton to Palm Island.

Margo Neale is feeling proud. “Here we are,” she says, “250 years after the British set out to colonise and civilise us, taking our culture to the British – to teach them how to survive in this fragmenting world.” Neale, an Indigenous Australian from the Gumbaynggirr and Kulin nations, is just warming up. “It is our civilisation,” she continues defiantly, “that had the resilience to survive over millennia: the ice age, sea rises, drought, invasion, violence, all sorts of oppression and pandemics. So, this is us showing Britain we have the knowledge to survive – knowledge held in the songlines.”

Neale, who is also of Irish descent, is talking about the plan to bring the National Museum of Australia’s extraordinary 2017 exhibition Songlines, which she co-curated, to Britain. The show will have its European premiere at the Box in Plymouth – which is where, Neale can’t resist pointing out, Captain James Cook set sail from in 1768, becoming the first European to set foot on the east coast of Australia.

Songlines is among the many highlights of the UK/Australia Season 2021-22 launching this month, the largest ever cultural exchange between the two nations, embracing just about every type of artform going, from uprising anthems sung by strikers to a pair of shell-covered slippers from Sydney that found their way into a Buckingham Palace hall cupboard. 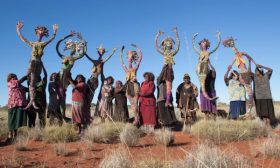 The notion of songlines was largely – and reductively – introduced to the UK and to non-Indigenous Australia through British writer Bruce Chatwin’s 1987 book The Songlines. Yet these phenomena are considerably more complex than Chatwin could describe. They embody the stories of ancestral beings and their creation of the landscape whose churinga (or dreaming) paths have wisdom etched into their every part.

Subtitled Tracking the Seven Sisters, the show is both metaphor and allegory, as a lustful sorcerer chases the fleeing sisters. He’s a “shape-shifter”: he becomes a tree to tempt them with shade – and a snake they can kill and eat. The story even goes subterranean, as the women dive into a waterhole to escape. They can fly, too, taking off from the Earth to become one with the Orion constellation and other star systems.

But stories from Indigenous culture are not all that the UK/AU Season is about. The vast arts extravaganza will also pick up the simmering generational tensions between British colonialism and the painful Indigenous experience. Take, for example, that extraordinary find in Buckingham Palace: a pair of dainty, elaborately adorned baby slippers that were crafted by an Indigenous Australian woman. Such distinctive shellwork slippers were made and sold by women in La Perouse, Sydney, in the early 20th century to help their families as they struggled under postcolonial oppression. This included the widespread state theft of their children, driven by the racially eugenicist “white Australia policy”, which lasted until as recently as the 1970s.

This brutal backstory lends a sombre resonance to these slippers, which were presented to the Duchess of York when she visited Australia with the Duke (later King George VI) in 1927. The royal couple had left their infant Elizabeth – now the queen – at home for their six-month tour and were overwhelmed with baby gifts. The slippers, now permanently displayed in Windsor Castle, are the first objects featured in Ancestors, Artefacts, Empire, a new book published by the British Museum to coincide with the season that explores 160 Indigenous Australian objects held (though rarely publicly seen) in British and Irish museums. 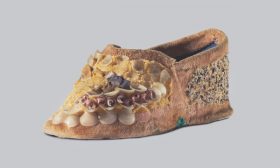 The season’s overall theme – “Who are we now?” – is appropriately ambitious, given the extent to which empire still looms over Australia. Monuments and names of white British men – some who murdered Indigenous people – still dominate the country’s commemorative topography. It has more monuments for animals than Indigenous people, despite the latter’s 60,000-year history on the continent, Earth’s longest continuous civilisation.

The country’s big moments of national commemoration remain the divisive Australia Day on 26 January (when Arthur Phillip’s first fleet arrived in 1788 to establish a penal colony) and Anzac Day on 25 April (when Australians under British command participated in the disastrous 1915 Gallipoli invasion). Last year, Covid-19 stymied plans for a lavish celebration of the 250th anniversary of the arrival of James Cook, Australia’s most memorialised historical figure. Cook was hailed – until far too recently – as the continent’s “discoverer”, even though the land had been occupied by humans for tens of thousands of years.

Brixton and Palm Island were labelled as riots to exaggerate their supposed threat. But people were protesting for their human rights

Generations of mostly white Australians – from artists to intellectuals and writers – have felt the allure of Britain just as Britons still yearn for a rite-of-passage taste of Bondi, the outback or the Great Barrier Reef. The UK-Australia relationship remains equally symbiotic in terms of trade, diplomacy, defence and (white settler) history. But at a time when Australia has repeatedly proven its inability to recognise First Nations people in its British-styled constitution, or to adopt a national process of truth-telling about British invasion, violent dispossession and a legacy of ongoing oppression, the UK/AU Season is deeply resonant.

Next year, Jessie Lloyd begins a six-week residency in London with the Border Crossings Origins festival, which explores First Nations culture. Lloyd, an Indigenous Australian celebrated for her rediscovery and performance of folk music through the Mission Songs Project, will collaborate on the Brixton Music Map to rediscover and chart the music of the London area’s 1981 uprising – or “riots”, as they were miscast at the time. 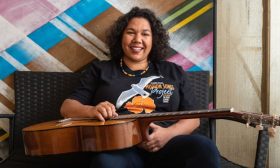 Michael Walling, from Origins, invited Lloyd after hearing her perform a song written by her grandfather, Albie Geia, who led a 1957 strike (also misrepresented as a riot) on Palm Island in far-north Queensland. Palm Island has a dark history as a place to which Indigenous Queenslanders – including stolen children and those who committed the most minor offences – were banished. They worked and lived in terrible conditions, their wages often withheld.

“Michael saw my show and heard the song,” she recalls. “He said it reminded him of the Brixton ‘riots’. Both events were labelled as riots as a way to exaggerate their supposed threat. But people were protesting for their human rights. So this gives the locals an opportunity to tell their version, through music, of what happened, as opposed to the newspapers and police labelling it rioting.”

Being in Brixton gives a special resonance: it will not feel like “working with the motherland”, she says. “So I get to avoid a little bit that colonial thing, if you know what I mean. I’m not going there to work with England so to speak – I’m going there to work with people I relate to and who have maybe experienced the same oppressive histories.”

Is there any other common ground? Well, rivalries apart, this is often to be found in cricket. Besides aficionados, however, few people probably know that the first Australian team to tour England in 1868 was all-Indigenous. In 2015, Gaye Sculthorpe, who is of Indigenous Tasmanian ancestry and head of the British Museum’s Oceania section, rediscovered the artefacts of that tour at Exeter’s Royal Albert Memorial Museum. They include shields, spears and boomerangs left behind by the team. The museum had no idea of the tales behind them. “People were astounded when they began to hear the story,” says Sculthorpe, who co-edited the book on the rediscovered museum objects. 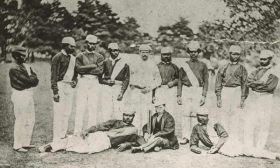 ‘People were astounded when they heard the story’ … the Australian cricket team visit England in 1868. Photograph: British Museum.

The Times, back in 1868, wrote of the cricketing visitors with barbed praise: “Having been brought up in the bush to agricultural pursuits under European settlers, they are perfectly civilised and are quite familiar with the English language.” Sculthorpe adds: “And one of the men in the team died while he was here in London.” This was Bripumyarrimin – known as King Cole – who was unable to recover from a chest cold and is buried at Bethnal Green. “So through the objects they brought,” says Sculthorpe, “Britain is rediscovering its colonial past in Australia.”

Many similar items have been rediscovered, including spears taken by Cook from Kamay (Botany Bay) in 1770 and an emu-feather skirt bound with wire, taken from Victoria in 1836 and now at Ulster Museum in Belfast. It would be no great surprise if their current whereabouts raised questions about ownership and the repatriation of cultural property.

“We’ve described these objects as having both Indigenous histories plus imperial histories,” says Sculthorpe. “Now we are trying to reconnect them in time and space – to give back some meaning, to make them more accessible to people.” Their status is recorded in Ancestors, Artefacts, Empire. “We see the book as an opening up of these collections so people know what is here and have conversations about their significance – and what should happen to them.”

Perhaps more globe-spanning treasures will be found among the royal bric-a-brac in Buckingham Palace’s hall cupboards.