June 11th, 2021 | Browse other: News. | Tagged with: museum board members who hold dissenting views "flushed out", UK culture war: museum trustees are paying the price for disagreeing with government's policies | 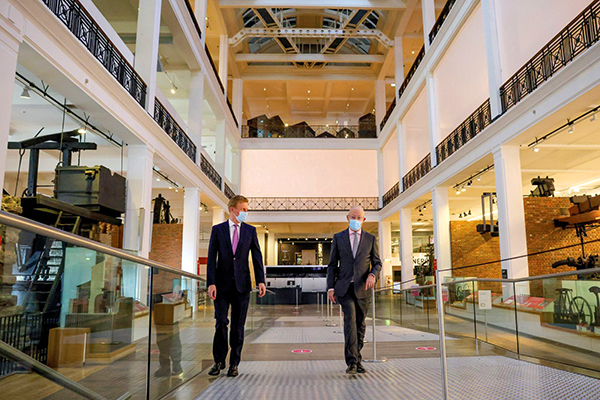 Two trustees embroiled in recent rows over the UK government’s interference in public bodies have told The Art Newspaper about their fears for the culture sector as ministers are accused of flushing out museum board members who hold dissenting views.

The science author and historian Sarah Dry withdrew as a trustee of the Science Museum Group in March after she was asked to support the government’s position on contested heritage. Meanwhile, the re-appointment of the Bangladeshi-British academic Aminul Hoque as trustee at Royal Museums Greenwich was vetoed by the government earlier this year, prompting Charles Dunstone, the chair of the museum board, to resign. Hoque was reportedly rejected because of his focus on “decolonisation”.

Dry says she stepped down from the Science Museum Group board because of guidance from the UK government asking incoming and reappointed trustees to “individually and explicitly express their support” for a specific government policy, namely the “retain and explain” approach to contextualising controversial monuments and historic statues. The Department for Digital, Culture, Media and Sport (DCMS) told Dry that the new guidance should be implemented following “the emergence of the debate last summer”, referring to contested heritage in the wake of the Black Lives Matter protests.

In a letter to Mary Archer, the chair of the Science Museum Group board of trustees, Dry outlines her reasons for withdrawing from the board, saying: “In my view, any requirement which seeks to constrain the independent curatorial and interpretive work of national museums violates the long-established principle of arm’s length bodies. Today it is contested heritage. Tomorrow it may be another issue.”

The arm’s length principle ensures national museums and organisations such as Arts Council England can operate independently, without government interference. In her letter, Dry also quotes the former Conservative culture minister Ed Vaizey’s remarks in The Art Newspaper that the government’s strategy on contested heritage is “an attack on their [cultural bodies’] independence and scholarship”.

Dry stresses that the excellence of the UK’s national museums is directly linked to their independence. “Every member of the public loses out when museum boards and staff are no longer free to carry out their work unconstrained by specific government policies,” she says. She believes that the need to support government policy is a “loyalty test”; such requirements “exert a chilling effect on the work of curators and other museum staff as they plan and carry out future projects”, Dry adds.

Meanwhile, Aminul Hoque, a lecturer in educational studies at Goldsmiths College, University of London, tells The Art Newspaper that he was “shocked, disappointed and baffled” by the decision to block his re-appointment at Royal Museums Greenwich. “I feel wholeheartedly valued and supported by the actions of Sir Charles [Dunstone],” he says.

Hoque says that he wrote to the DCMS in February and again in April, asking for confirmation and an explanation for the decision. “I eventually received confirmation and the official reason that ‘reappointments and extensions require the agreement of ministers and there is no automatic presumption of reappointment’,” he says.

“As a British-Bangladeshi and someone who is proud to be British, I find it odd that there are those who would rather close down conversations about difficult aspects of Britain’s past than have an open and honest debate about them,” Hoque adds.

The role of trustee is unpaid; Hoque’s appointment was made in 2016 in “accordance with the OCPA [Officer of the Commissioner for Public Appointments] Code of Practice. It is a requirement of the code that political activity by those appointed is declared. Dr Hoque has declared no such political activity,” said the Conservative-led government at the time.

Museums Journal, the publication of the UK Museums Association, reports that at least one other board member at a national museum has had their appointment blocked by the DCMS in recent weeks. “It looks as if the government is introducing American-style culture wars by shortening the arm in the arm’s length bodies [national museums],” says a senior museum figure who preferred to remain anonymous.

Asked if the government’s actions are part of a wider strategy to stoke a “culture war” around issues such as colonialism and slavery, Hoque says that people should draw their own conclusions based on the government’s actions. “If we believe in the values of democracy, plurality of opinions, respect, equality, inclusivity and humanity, then the diversity of boards is vital,” he adds.

A recent casualty of the so-called “war on woke” has been the chair of the National Trust, Tim Parker, who announced his intention to step down to trustees 18 May. Parker was appointed in 2014 and has served two three-year terms. A motion of no confidence in Parker was due to be tabled at the trust’s annual general meeting by 50 members, who called for “fresh leadership” of the organisation.

A spokesperson for the DCMS says: “There is no automatic presumption of reappointment, and indeed, in the vast majority of cases, fresh talent is added with new appointments made. Guidance for the non-executive directors of public bodies makes it clear that they should act to deliver the outcomes expected by sponsor departments, ministers and ultimately the public.”

CLARIFICATION (8 June): This article was amended to accurately reflect the situation re: resignation of Tim Parker, chair of the National Trust.