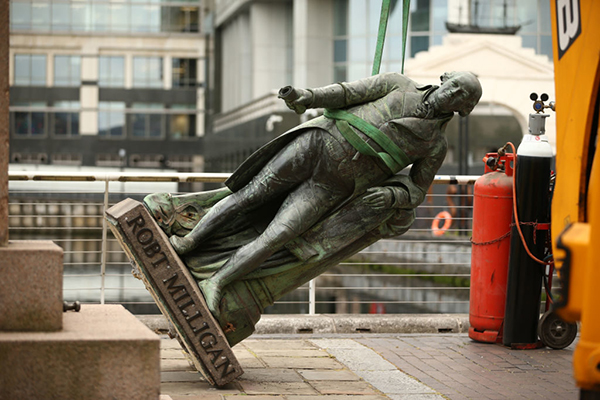 Workers prepare to take down a statue of slave owner Robert Milligan in London. Photo by Yui Mok/PA Images via Getty Images.

In a letter sent to 26 institutions, the culture secretary instructs publicly funded institutions to “act impartially.”

The UK government has told museums and galleries, including the British Museum and Tate Gallery, not to remove statues or other objects of contested cultural heritage from display—or risk losing their public funding.

In a letter sent September 22 to several public bodies, the secretary of state for digital, culture, media, and sport, Oliver Dowden, set out the government’s position on contested heritage: “The Government does not support the removal of statues or other similar objects.”

The letter comes in the wake of fierce debating surrounding statues commemorating historic figures who played a role in the transatlantic slave trade and the advance of British imperialism. This includes the controversial toppling of a monument to slave trader Edward Colston in Bristol, as well as growing calls to restitute African cultural heritage that was taken during the colonial period.

“History is ridden with moral complexity,” Dowden writes. “Statues and other historical objects were created by generations with different perspectives and understandings of right and wrong.”

The culture secretary continues to say that while we may now find some of these figures “deeply offensive” and disagree with those who created the monuments, “they play an important role in teaching us about our past, with all its faults.” He adds that, instead of erasing these objects from view, public bodies should “contextualize or reinterpret them in a way that enables the public to learn about them in their entirety.”

Dowden goes on to remind the letter’s recipients that, as publicly funded bodies, they “should not be taking actions motivated by activism or politics.”

The letter was sent to 26 institutions including the Imperial War Museum, National Gallery, and National Portrait Gallery, and the Victoria and Albert Museum. Funding bodies, such as Arts Council England and the National Lottery Heritage Fund, were also included.

As the UK heads into its next Comprehensive Spending Review, when it will assess all kinds of government funding, Dowden’s letter takes on a warning tone. “The significant support that you receive from the taxpayer is an acknowledgement of the important cultural role you play for the entire country,” he writes. “It is imperative that you continue to act impartially, in line with your publicly funded status, and not in a way that brings this into question.”

The culture secretary says he will organize an online roundtable to give these public entities the space to discuss the government’s position and its practical implications for them. A spokesperson for the department for digital, culture, media, and sport tells Artnet News that this roundtable will take place “in due course.”

Before then, it promises to send out a questionnaire to glean a better understanding of the work these institutions are doing surrounding this topic, and adds a reminder that they should all be notifying the government before taking any action or making public statements in relation to contested heritage or histories.

The government position is hardly surprising given the British Prime Minister Boris Johnson’s statements on these issues in the past. At the peak of Black Lives Matter demonstrations across the UK this summer, which included protests against public sculptures dedicated to historical figures connected to slavery and the British Empire, including one of Winston Churchill, Johnson said he would defend Churchill’s monument “with every breath” in his body.