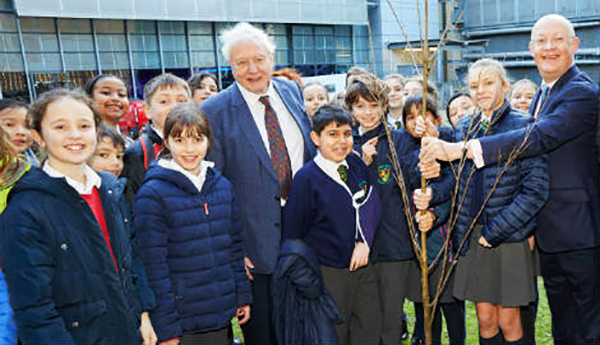 The first significant exhibition on carbon capture and storage technology will be held at London’s Science Museum this year as part of a public programme on the climate emergency launched this week by the Science Museum Group (SMG).

As part of the programme, the SMG also revealed that climate will be the theme of this year’s Manchester Science Festival, which is produced by the Science and Industry Museum.

The programme was announced at the launch of the UK Year of Climate Action, a cabinet office initiative unveiled this week by David Attenborough and prime minister Boris Johnson at the Science Museum. The initiative aims to increase awareness of and support for changes needed to reach the UK’s net zero emissions target by 2050.

Both SMG projects will open to coincide with COP26, the crucial United Nations Convention on Climate Change, which will be held in Glasgow this November and see world leaders outline how they plan to fulfil their commitments to limit global heating to less than 1.5 degrees.

SMG director and chief executive, Ian Blatchford, said: “There is no more pressing issue facing the world, and the five museums in the SMG are uniquely placed to engage a huge audience around the science of climate change, and the technological challenges and solutions around the crucial energy and food transitions we need to achieve. Our visitors are the engaged citizens and scientists of now and tomorrow.”

In addition to the public programme, the SMG will host a series of conferences exploring the theory and practice of sustainable curating in the museum and heritage sectors. Blatchford said that exploring solutions to global heating would remain a central theme of the institution’s work in the coming decade.

But environmental campaigners have in the past accused the SMG of hypocrisy over its longstanding relationships with fossil fuel companies; a group of Extinction Rebellion protestors poured fake oil over themselves during a protest at the National Railway Museum in York last December.

Blatchford has defended the institution’s decision to maintain links with the fossil fuel industry, previously saying that “these companies have the capital, geography and people to be major players in finding solutions to climate change and demonising them is unproductive”.

The SMG joins a growing tally of museum and heritage organisations to outline commitments to tackling the climate emergency. In January, the National Trust unveiled a series of climate initiatives, while last week the Horniman Museum and Gardens in London launched its own Climate and Ecology Manifesto, which sets out its “commitment to accelerating a step-change in how visitors engage with nature across our estate, and to making positive, practical changes to our own organisation”.

The manifesto’s commitments include transforming how the Horniman uses its natural history and living collections to engage visitors with climate and ecological issues; championing environmental causes in its creative output; inspiring change for future generations; and investing in environmental research.

The Horniman is also one of a number of cultural institutions to declare a climate emergency; others include the Museums Association, Tate and, most recently, the Natural History Museum.