You are here: Home » Articles filed under: 'News' » Article: 'UK museum of year' 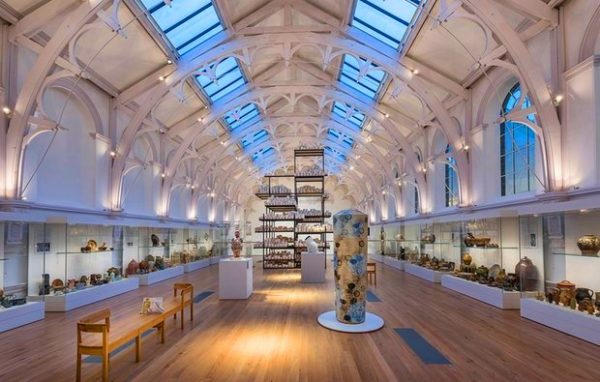 The new mezzanine at York Art Gallery. Source: The Guardian.

From a Scottish country estate to a psychiatric hospital, the Museum of the Year shortlist is announced this week. Tracy Chevalier, Grayson Perry, Norman Foster, Antony Gormley and John Akomfrah champion their favourites

I was writer in residence at the gallery in 2008 and so knew it in its old incarnation as well as its new, following the superb renovation last year. It remains a very democratic experience. York Art Gallery has always been welcoming, with lots of places to sit and ways to interact with the collection that are not naff, most notably being able to handle some of the ceramics. A domestic-style space in which to view the ceramics collection donated by Anthony Shaw in their natural setting encourages this interaction. And there are now even more signs saying “hands on” rather than “hands off”, including on a Jacob Epstein bust of Paul Robeson.

Everyone wants to touch art, especially ceramics, and the gallery has taken an executive decision that things in the handling collection will get broken occasionally (although now they have put a carpet down they bounce more often than not). The result is a sense of boundaries breaking down, and you stop just passively going from exhibit to exhibit. You really do believe it is your place.

The biggest change is in the building itself and what that has allowed the museum to do with its collection. The skylights in the high-ceilinged Victorian central hall were boarded up in the 1960s. By opening them up, and creating a new mezzanine level, the gallery has created a spectacular new space that is showered in daylight. Ceramics can withstand natural light, unlike painting and other art works that have to be preserved in dimmer rooms.