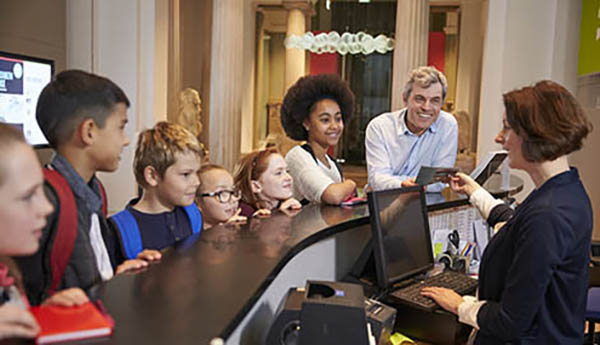 Survey reveals many front-of-house staff believe they are unable to affect change in their museum and feel less valued than front back-of-house colleagues.

Many of those who work in front-of-house in museums feel undervalued, powerless and demotivated, according to a new survey.

The survey was carried out by @FoHMuseums, which was set up to promote and celebrate the work done by front-of-house staff. This year, 564 people responded to the questionnaire, compared with 190 in 2018. Of the 564 who took part, 331 (59%) defined themselves as working in a front-of-house role.

“There are some obvious reasons why front-of-house staff may feel undervalued,” says Rachel Mackay, the manager at Historic Royal Palaces at Kew, who has worked in a variety of roles, including front-of-house. “They are often the lowest-paid members of staff in an organisation, or they may not be directly employed by the museum they are supposed to represent.

“If, as a museum manager, you ever wonder why your front-of-house staff might not be ‘living the brand’, having a look at the type of contract they are employed under might be a good place to start.

“Zero-hour contracts, outsourcing and agency working all play a part in making front-of-house staff feel like they aren’t as much a part of the organisation as their back-of-house colleagues, or valued as highly.”

“Many, though not all, front-of-house staff want to develop skills in other areas as well, but can often miss out on continuing professional development because it isn’t seen as crucial to their current role.”

Mackay agrees that the reasons front-of-house staff often feel undervalued and demotivated are deeper than contracts and pay. She says people in these roles are highly knowledgeable source of information about visitors and how a museum is serving its audiences.

“My advice, having worked both sides, would be not to go to front-of-house teams with questions to which you think you already know the answer,” she says. “Instead, respect their expertise and be willing to learn something new about your museum.

“When I worked front-of-house, I felt valued when my views and opinions were taken seriously. Now, I try to make sure my host team is involved in projects from an early stage, whether it’s gathering visitor feedback on a trial piece of interpretation, getting input into a ticket-desk design brief or planning new training.”

William Tregaskes, the museum coordinator at Cynon Valley Museum in Wales, and a co-founder of @FoHMuseums, says: “Front-of-house staff are the face of every museum. They are the embodiment of the museum and define the visitor experience. Can a museum ever fully engage with its audience and become more accessible and representative if front-facing staff feel undervalued and disengaged with the work of the sector?”

Having worked front-of-house myself, and still having many friends, colleagues and even complete strangers who share their tales with me, I do understand why many staff feel there is a struggle to be appreciated in their role.

Despite an increase in venues that are acknowledging the varied skills of front-of-house staff, what I hear most often is the sad side of staff feeling undervalued and overworked by an increasingly financially squeezed workplace.

It can, unfortunately, be easy to see front-of-house staff as whining when they say that roles are being reduced to bare requirements, as volunteers take over the engaging elements, or they’re expected to pick up skilled extra duties without extra pay as curatorial and other expert staff are not replaced.

Previously, people have taken front-of-house roles and relished opportunities to shine and progress in their career, or enjoyed and remained in such roles due to the variety and sharing their love of a subject with the public. I’m increasingly hearing tales where undoubtedly tough decisions that impact on front-of-house staff have to be made at senior levels, but those decisions are poorly communicated, mishandled in execution.

And any sympathy feels hollow when it comes from senior managers who don’t speak with front-of-house staff other than to deliver bad news, or to ask why there’s no coffee in the meeting room yet.