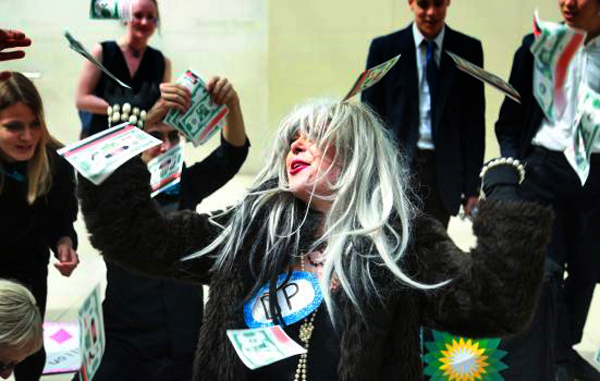 The protest at the British Museum by BP or not BP. Photo: Kristian Buus.

The British Museum confiscated items including bow ties and waistcoats from campaigners in London because it was “not aware of what the protestors intended to do with them”.

“We are seeing the growth of artists, activists and members of the public undertaking creative and artistic actions in order to raise concerns about museums’ ties to the fossil fuel industry in several countries,” Chris Garrard, a campaigner at BP or not BP, told AP.

Confiscated items
Garrard added that before the BP or not BP protest in the British Museum, which involved 40 performers and a “rigged gameshow”, security staff confiscated cardboard signs, bow ties, wigs, waistcoats and handfuls of flyers from three people.

“The confiscation of items happened before the performance as members of the group went through bag checks and, as you might expect, bow ties and waist coats were not listed on the museum’s disallowed items list,” he said.

“We were also aware of significantly heightened security and, after the performance, two police officers who had come to the museum.”

He said the British Museum’s response to the protest was “concerning” as “there should be room for peaceful freedom of expression and for museums to be open to controversy rather than attempting to control it or shut it down”.

When asked whether the items were confiscated, a spokesperson for the museum said: “Some items that visitors wished to bring into the Museum were not accepted, as we were not aware of what the protestors intended to do with them. But these items were returned when they had finished their visit.

“The Museum allows peaceful protest on site as long as there is no risk to the collection, staff or visitors.”

Global movement
The performances in London, Paris and Amsterdam took place in tandem with the Global Divestment Mobilisation, a two-week campaign which aimed to pressure organisations to get rid of stocks, bonds or investment funds that are “unethical or morally ambiguous”.

Over 100 organisations in the UK have signed a divestment commitment, including universities, local councils and charitable trusts.

“We believe that educational and religious institutions, governments, and other organizations that serve the public good should cut their ties to the fossil fuel industry.”

Although no UK cultural institutions have signed a divestment commitment, over 200 arts organisations, artists and culture workers have pledged not to take any oil, coal, or gas corporate sponsorship for their work, via the Fossil Funds Free initiative. These include the Royal Court Theatre, Artsadmin and artist Raoul Martinez, who has been nominated for the BP Portrait Award.

BP ended its 26-year sponsorship of Tate in 2016, which the company claimed was due to a “challenging business environment”. The oil giant later renewed a five-year sponsorship deal with the British Museum, the Royal Opera House, the Royal Shakespeare Company and the National Portrait Gallery, worth £7.5m.

Update 17/05/2017: This article was edited to clarify that while no UK arts organisations have signed the divestment commitment, many have committed to the Fossil Funds Free initiative.