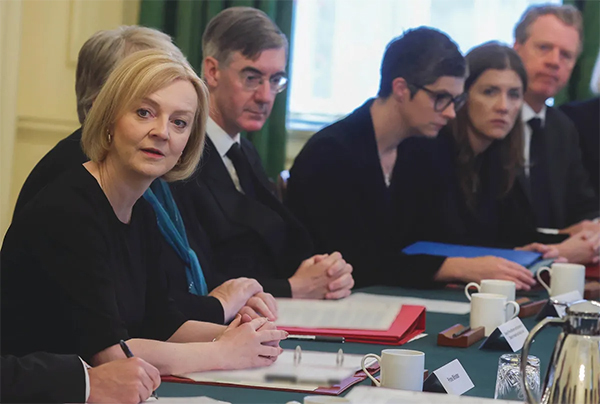 Liz Truss will meet with Greek prime minister Kyriakos Mitsotakis where the matter of the Parthenon Marbles is likely to be raised. Crown Copyright.

Move rebuffs George Osborne, the chair of the British Museum, who proposed a new collaborative arrangement.

The UK Prime Minister Liz Truss has rejected suggestions that an agreement can be made with Greece over sharing the Parthenon Marbles, which have been housed at the British Museum in London since the early 19th century.

Her position on the controversial restitution issue puts her at odds with George Osborne, the chairman of the British Museum and former UK chancellor, who said earlier this year there is a “deal to be done” with Greece, fuelling the long-standing debate over the reunification of the ancient sculptures. When asked about a possible deal, Truss told the TV and radio channel GB News: “I don’t support that.” Osborne could not be reached for comment.

In an interview on the LBC radio station with Andrew Marr in June, Osborne said that a “deal is to be done where we can tell both stories in Athens and in London if we both approach this without a load of preconditions, without a load of red lines… Sensible people could arrange something that makes the most of the Parthenon marbles but if either side says there’s no give at all, then there won’t be a deal.”

Crucially, the former UK prime minister, Boris Johnson, shifted the decision for returning the Parthenon Marbles to Greece to the trustees of the British Museum after meeting the Greek prime minister, Kyriakos Mitsotakis last November. A government spokesman subsequently told the Guardian: “The British Museum operates independently of the government. It is free, rightly, from political interference… Any question about the location for the Parthenon sculptures is a matter for them.”

Mitsotakis is due to ask Truss to consider returning the marbles during an inter-governmental meeting scheduled for later this year. “At a time when Truss will be looking to build her credibility and when the UK is sort of cornered in terms of its overall image after the [Queen’s] funeral it will be a fantastic gesture, and that’s what I’ll tell her,” Mitsotakis told the Sunday Times. The Greek prime minister also believes King Charles may support his plan to return the marbles.

There has been continued pressure from campaign groups such as the British Committee for the Reunification of the Parthenon Marbles to hand over the sculptures to the Acropolis Museum in Athens.

Recently the British Museum has struck a conciliatory tone over the Parthenon Marbles. In August, Jonathan Williams, the museum’s deputy director, suggested that a new “cultural exchange” arrangement with Greece could be on the horizon. “The sculptures are an absolutely integral part of the British Museum,” Williams added. “They have been here over 200 years.” But he says that “we want to change the temperature of the debate”, raising the option of loaning the works.

For decades, officials at the museum have adopted a hardline stance on sending the works back to Greece, insisting that a 1963 act of parliament prevents deaccessioning the ancient objects that have been housed at the London institution since the early 19th century.

The fifth-century BC statues have been at the British Museum since 1817 after they were removed from the Parthenon temple on the Acropolis in Athens by the Scottish nobleman Lord Elgin, the then Ottoman ambassador. An online statement previously posted by the museum reiterated that the trustees have never been asked for a loan of the Parthenon sculptures by Greece, “only for the permanent removal of all of the sculptures in its care to Athens”.