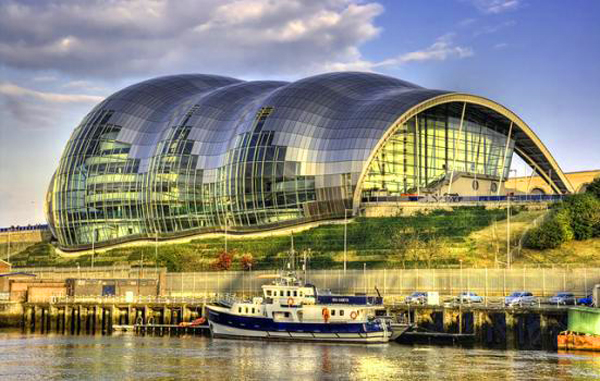 Sage Gateshead requests visitors now use the east side entrance into the building.

Ticket sales are down at some arts organisations as a “direct and understandable result of the attack”.

Major arts centres across England have increased security in the wake of the suicide bomb attack at the Manchester Arena this week, which killed 22 people and injured 59 others.

While some arts organisations said subsequent performances and ticket sales were unaffected, others suggested sales had fallen as a “direct and understandable result of the attack”.

Manchester organisations including HOME, Manchester International Festival (MIF) and the Royal Exchange told AP they were working with local police forces to update security procedures for their buildings.

Sheena Wrigley, Executive Director at HOME, told AP: “There is a really good network here in Manchester with fast flowing communication between the leading cultural organisations and venues and the City Council, city centre management company (City Co) and the police.

“We have reissued all our emergency procedure guidance to our staff and require senior staff to ensure this has been read and acknowledged by signature by all staff.

“We have considered but decided against bag checks at this stage. Staff are being briefed about increased vigilance.”

The venue, located just over a mile away from the site of the attack, added it had engaged additional door security, including extended cover from external security staff to cover weekday evenings as well as weekends.

In addition, Salford-based arts centre The Lowry wrote on Twitter that increased security, including bag searches, would be introduced “with immediate effect”.

John McGrath, MIF’s Artistic Director & CEO, said: “For now, the focus in the city is on caring for the victims and ensuring everyone’s safety… We hope the Festival will be a celebration of Manchester’s strength and spirit – for the people of the city and visitors from across the world.”

The attack has prompted a review of security policies for arts organisations in other cities around the country. Sheffield Theatres, which prefaced its press night on the evening following the attack with a minute of silence, said: “Over the years we have created a robust security policy in collaboration with the city, local authorities and the police.

“This is consistently reviewed and, after Monday’s events, we will be revisiting it in light of further advice to ensure that our staff and audiences are reassured of our procedures.”

“We are in regular contact with the Metropolitan Police and specialist security services and receive ongoing briefings from them which inform our own security plans across the site.

“We have introduced bag checks across our site. Staff will be on hand to make these checks as quick and easy as possible. All bags will be checked upon entry to the building and any bags which are larger than 30x50cm will need to be checked into our cloakroom on level 1.”

At Sage Gateshead, a spokesperson said: “We are working alongside Northumbria Police to introduce some enhanced safety procedures for the building. We would like to reassure our customers that safety is always our number one priority.

“We are asking visitors to please use the east side entrance (from Performance Square) to come into the building.

“For their own comfort and safety we will be carrying out security checks so we ask visitors to please arrive in plenty of time for events, and travel light if possible.”

Although some arts organisations told AP there had been no noticeable drop in sales, others said business had been affected.

HOME indicated it had “sold virtually no cinema or theatre tickets” on Tuesday, and while there had been people in its bars, restaurants, and on the outside Terrance, the mood was “quiet and very subdued”.

Similarly, Sheffield Theatres said: “There was a noticeable drop in sales [on Tuesday] which we believe is a direct and understandable result of the attack.”