Naomi Rea, The UK’s Creative Industry Faces a ‘Cultural Catastrophe’ as It Braces for a £74 Billion Loss Due to the Shutdown, a New Report Says, ArtNet, 16 June 2020

The report suggests that one in five creative jobs will be lost.

A startling new report projects that the UK’s creative industries could lose £74 billion ($94 billion) in revenue in 2020 due to the fallout from the coronavirus pandemic. The report predicts that the country’s creative sector will be hit twice as hard as the wider economy in 2020, with one in five creative jobs expected to be lost. 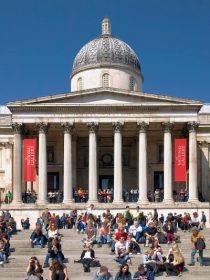 The loss could have a devastating effect on the economy at large. Before the coronavirus hit, the UK’s creative sector employed more than 2 million people, generating £111.7 billion for the economy, which is more than the combined input of the automotive, aerospace, life sciences, and oil and gas industries.

Now, it is facing a 25 percent decline—in other words, a £29 billion drop—in the gross value it adds to the British economy.

The report by Oxford Economics predicts that some 406,000 creative jobs will be lost this year, more than nine times the staff employed by British Airways.

Caroline Norbury, the head of the Creative Industries Federation, a national organization that advocates for the UK’s creative sector, has urged the government to increase its support for the creative industries with a cultural renewal fund.

“Our creative industries have been one of the UK’s biggest success stories but what today’s report makes clear is that, without additional government support, we are heading for a cultural catastrophe,” Norbury says. “If nothing is done, thousands of world-leading creative businesses are set to close their doors, hundreds of thousands of jobs will be lost, and billions will be lost to our economy. The repercussions would have a devastating and irreversible effect on our country.”

The report follows on the heels of an open letter published in April warning that the UK could become a “cultural wasteland” without urgent government funding. The letter was signed by more than 500 leading figures in the creative industries, including Grayson Perry and Anish Kapoor.

Museums and galleries specifically face losses of £743 million (or nine percent) of their revenue, and five percent of their workforce (4,000 jobs) before the year is out.

The design sector “will play an important role in responding to and recovering from the current crisis, but this report shows the huge impact that this pandemic will have on the future of the design and creative industries at a time when they are most needed,” Tim Marlow, director of London’s Design Museum, tells Artnet News.

Without additional government support, Marlow says, “we will see irreparable changes to the broader cultural landscape, leading to a critical loss of jobs and the closure of vital institutions.”

Across the sector as a whole, the report predicts that 119,000 permanent creative workers will be made redundant by the end of the year, and 287,000 freelance roles terminated. London, which is the UK’s art market hub, will see the greatest drop in gross value added from creative industries (£14.6 billion, or 25 percent), with one in six (or 112,000) creative jobs lost.

But the regions outside the British capital will be hardest hit relative to their contribution to the economy. Based on additional research released by Creative England this week, arts industries outside of London will take longer to bounce back, as they did after the 2008 recession.