February 10th, 2022 | Browse other: News. | Tagged with: Artists finding it harder than ever to make a living, COVID-19, Unesco warns of crisis in creative sector with 10m jobs lost due to pandemic | 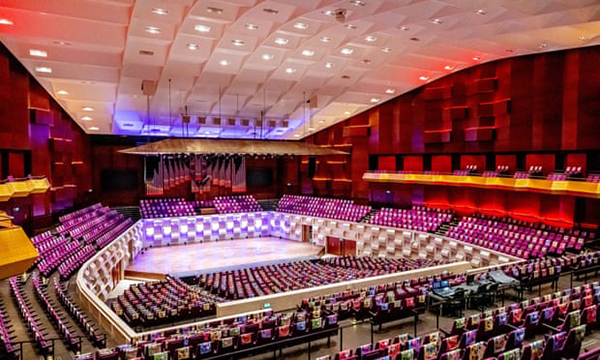 An empty theatre hall in Rotterdam, the Netherlands, in January 2022. Photograph: Robin Utrecht/Rex/Shutterstock

Artists finding it harder than ever to make a living despite being part of one of the fastest growing industries.

Ten million jobs in creative industries worldwide were lost in 2020 as a result of the Covid pandemic, and the increasing digitisation of cultural output means it is harder than ever for artists to make a living, a Unesco report has said.

Covid has led to “an unprecedented crisis in the cultural sector”, said Audrey Azoulay, the director-general of Unesco, the UN’s cultural body, in a foreword to the report. “All over the world, museums, cinemas, theatres and concert halls – places of creation and sharing – have closed their doors …

“What was already a precarious situation for many artists has become unsustainable, threatening creative diversity.”

Although the cultural and creative sector is one of the fastest growing economic sectors in the world, it is also one of the most vulnerable and is often overlooked by public and private investment, said the 328-page report, Reshaping Policies for Creativity.

Government spending on creative industries was declining in the years preceding the pandemic, and Covid led to a collapse in income and employment.

The report called on governments to bring labour protection of artists and cultural professionals into line with the general workforce, and suggested a minimum wage for cultural workers, and better pension and sick pay for freelancers.

“Even in countries with social security schemes designed for freelancers or self-employed people (who constitute a large part of the creative economy workforce), a significant proportion of such workers were often ineligible,” it said.

Since the pandemic began, “digitisation took a front seat … as it became more central to creation, production, distribution and access to cultural expressions. As a result, online multinationals consolidated their position, and inequalities in internet access became more significant”.

For most artists, the digital environment did not provide enough income to support a professional career.

Action was needed to address the “streaming value gap” – the disparity between the value that streaming platforms extract from content and the revenue generated by those who create and invest in creation.

Ernesto Ottone, Unesco’s assistant director-general for culture, said: “A basic paradox has emerged, whereby people’s global consumption of, and reliance on, cultural content has increased, however at the same time those who produce arts and culture find it increasingly difficult to work.

“We need to rethink how we build a sustainable and inclusive working environment for cultural and artistic professionals who play a vital role for society the world over.”

On the upside, many artists and cultural professionals have “seized the opportunity of the rise of niche streaming services to develop innovative projects in the digital sphere”.

The report cited Deedo, a pan-African music streaming platform, created in 2017 by Senegalese entrepreneur Awa Girard, that features more than 12m tracks and is accessible in six African countries as well as France and the UK.

“Within four years, Deedo has not only become a key player in the African music industry, but has also increased the visibility of African artists, while offering social engagement through its initiative ‘One song, One soul’ (which donates 5% of each subscription to the non-profit organisation of the user’s choice).”

The report also said gender equality was “a distant prospect” even though female workers made up 48.1% of the culture and entertainment sectors.

“Evidence suggests that women remain under-represented in positions of leadership, have less access to public funding and their work is far less visible and acknowledged than their male counterparts,” it said.

The Covid pandemic may also have taken a disproportionate toll on female artists and cultural professionals.

Only 33% of awards for the main film categories of 60 major film festivals worldwide were given to female artists and producers in 2019. Less than a quarter (24%) were awarded for best director and best screenplay.

The female workforce in the gaming industry is 30% worldwide. “This confirms women’s under-representation in some creative industries (particularly those linked to fast growing technologies) and overrepresentation in other, traditionally more precarious ones.”