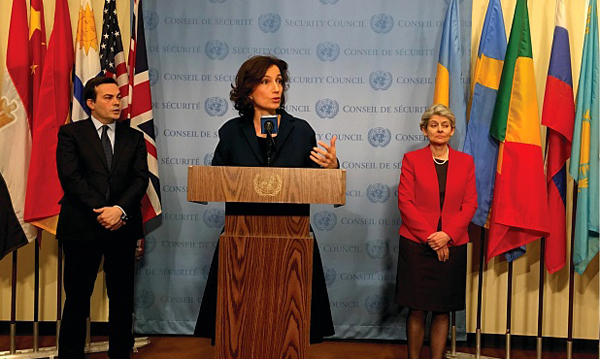 The race to become the next director-general of Unesco is heating up as the candidates for the top job at the UN’s education and culture agency have undergone a round of interviews with the body’s executive board. In March, Unesco announced that nine nominees are in the running to replace Irina Bokova, who is due to step down in November after eight years at the helm. Videos of interviews are available on Unesco’s website.

During its 72-year history, the organisation has had ten directors, seven of whom have come from Europe or North America. This time, however, there is just one candidate from these regions: Audrey Azoulay, the former culture minister of France, who has also served as cultural adviser to François Hollande, the former French president. She played a key role in the joint initiatives of France, Unesco and the United Arab Emirates to safeguard cultural heritage in conflict zones, announced last December, and was a signatory to the Florence Declaration condemning the destruction of cultural sites at the first G7 culture summit in March.

Azoulay was forced to defend her candidacy soon after her nomination when the French politician Joëlle Garriaud-Maylam, who is a member of the French commission for Unesco, called it an “insult to the Arab countries”, saying that “moral commitments had been made for the post to fall to one of their own”, according to reports in the French press. Azoulay’s response was that she represented France in the candidacy and that she found such a comment worrying, especially coming from an elected French official.

For the first time in the history of Unesco elections, four candidates come from the Arab states—one of six “cultural regions” designated by Unesco. Some critics have said that this could divide the region and hinder the chances of an Arab state candidate securing the job. Of the four, two are leading vigorous campaigns: Moushira Khattab of Egypt and Hamad Bin Abdulaziz Al-Kawari of Qatar. A career diplomat, Khattab is a human rights advocate known for championing women’s and children’s causes, and served as Egypt’s minister of family and population under the country’s former president Hosni Mubarak. She is also on the board of the National Museum of Egyptian Civilization, and her Unesco “vision statement” states that she plans to promote cultural diversity and focus on building the capacity of member states to promote, manage and protect heritage.

Al-Kawari, the cultural adviser to the emir of Qatar and former ambassador to France, the US and the UN, served as his country’s first culture minister from 2008 to 2016. He was in charge when Doha was named 2010 Arab Capital of Culture and the cultural year exchange programme was launched, with the UK being its first partner in 2012. He has campaigned extensively since Qatar named him its official nominee in March 2016 (three months before Egypt nominated Khattab). He has reportedly secured public endorsements from the heads of state of countries including El Salvador, Haiti, Bangladesh, Nepal and Kenya.

Unesco’s executive board is responsible for deciding on the next director-general. It is made up of 58 of the organisation’s 195 member states, whose representatives are elected for four-year terms. The states are divided by regions, with each allocated a number of votes: Arab states (7), Asia and the Pacific (12), Africa (13), Western Europe and North America (9), Latin America and the Caribbean (10), and Eastern Europe (9).