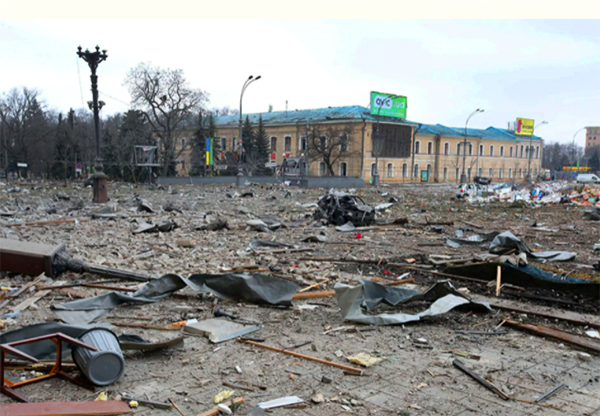 Svobody (Freedom) Square in Kharkiv, northeastern Ukraine, is covered in rubble after a missile strike by Russian forces on 1 March.© Photo by Vyacheslav Madiyevskyy/Ukrinform/abacapress.com

The UN body is monitoring heritage sites by satellite and plans a meeting with Ukrainian museum directors to safeguard collections.

Unesco said it is “gravely concerned” about damage caused by Russia’s invasion forces in the cities of Kharkiv and Chernihiv and called for the protection of Ukrainian cultural heritage, including the country’s seven World Heritage sites.

The UN cultural organisation said it is working to “mark as quickly as possible key historic monuments and sites across Ukraine with the distinctive emblem of the 1954 Hague Convention, an internationally recognised signal for the protection of cultural heritage in the event of armed conflict.”

Unesco said it is also seeking to organise a meeting with museum directors across the country to coordinate the safeguarding of museum collections and cultural property. The statement said it will also monitor damage to cultural sites through satellite imagery analysis.

“We must safeguard this cultural heritage, as a testimony of the past but also as a vector of peace for the future, which the international community has a duty to protect and preserve for future generations,” Unesco Director-General Audrey Azoulay said in a statement.

Kharkiv, Ukraine’s second-largest city after Kyiv, was the capital of Soviet Ukraine from 1917 to 1934. Its central Freedom Square, one of the largest squares in Europe, is home to an important Constructivist architectural ensemble including one of the first concrete Soviet skyscrapers—the 14-story Derzhprom building (or Gosprom in Russian.)

A Russian missile hit a government building on the other side of the square on 1 March, also damaging the opera house and a concert hall, according to the BBC. Ukrainian President Volodymyr Zelensky described the attack as “terror against Ukraine” and said “there were no military targets in the square.”

Shelling on 2 March also damaged the Assumption Cathedral in the centre of Kharkiv, a Russian Orthodox church, according to photos published by Ukrinform, the Ukrainian state news agency. The agency said stained-glass windows and decorative features were destroyed.

Unesco also condemned a missile attack that affected the Babyn Yar Holocaust memorial in Kyiv, the site of one of the largest mass shootings of Jewish people during the Second World War. The attack on 1 March, which was targeting a nearby TV tower, killed five civilians, the BBC reported.

Footage circulating yesterday showed a missile hitting a residential building in Chernihiv in northern Ukraine. The historic centre of the city is listed on Ukraine’s World Heritage Tentative List.