Professor Andrew Pask & Dr Axel Newton, Tasmanian tigers start to look like dogs in the pouch, The University of Melbourne,

When European settlers first arrived in Tasmania, they were surprised to find a large dog-like marsupial that had stripes similar to a tiger.

These features provided the animal with its common name, the Tasmanian tiger, and its scientific name, Thylacinus cynocephalus, translating to “dog-headed pouched one”. 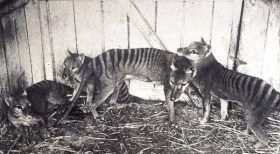 Despite remarkable similarities between the Tasmanian tiger and large dogs such as the grey wolf, they are very distant relatives and have not shared a common ancestor since the Jurassic period, over 160 million years ago.

Their striking similarities are the result of convergent evolution, a process where different animals evolve to look the same because they occupy similar places in the ecosystem, sharing some lifestyle factors such as hunting.

However, how animals evolve to become convergent, particularly the forces driving their early development, is a question that still puzzles scientists.

A new collaborative study led by researchers at the University of Melbourne used state of the art technologies such as micro-CT scanning and digital reconstructions to compare the skulls of the Tasmanian tiger and wolf across their early development and into adulthood, finding that they are even more similar than meets the eye.

Tasmanian Tiger in the pouch

After reconstructing the early pouch development of the thylacine, we still wanted to understand when during its growth the Tasmanian tiger established its canine-like skull shape.

We know that the thylacine and wolf look similar as adults, but we didn’t know when they started to exhibit their remarkable similarities during development. 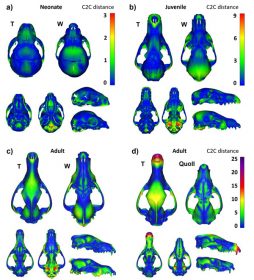 Heat maps of thylacine (T) wolf (W) and quoll skulls side by side. Blue/green indicates a closer similarity. Picture: Supplied.

Through collaborations with Australian museums and the Museum of the North in Alaska, USA, our team loaned thylacine and wolf skulls of different ages, stages, and sizes, from newborns through to fully grown adults.

We then applied micro-CT scanning to the skulls to generate digital models which could be compared to determine when during development similarities arose between the thylacine and wolf.

CT scanning is a technique similar to a medical CAT scan, that can generate high-resolution, digital reconstructions of complex shapes such as skulls and bones. We can then make detailed statistical comparisons between structures such as nose and mouth shape.

Using these comparisons, we found that not only did the Tasmanian tiger resemble the wolf as adults, but were also extraordinarily similar as both juveniles and newborns.

Remarkably, the Tasmanian tiger pups were more similar to wolf pups than to other closely related marsupials like the quoll.

This was a truly unexpected finding, given that the thylacine and wolf last shared a common ancestor over 160 million years ago, back when dinosaurs still roamed the ancient world. 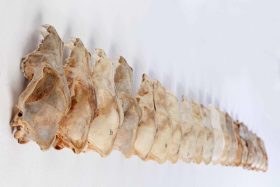 Through collaborations with Australian museums and the Museum of the North in Alaska, USA, researchers loaned thylacine and wolf skulls of different ages, stages and sizes, from newborns through to fully grown adults. Picture: Supplied.

This finding is even more remarkable when we think about how different reproduction is in marsupials, giving birth to tiny young that continue most of their early development in the pouch.

We thought the need to suckle at such an early stage of development, compared with dogs, might make the development of their skulls very different.

Our results also showed that certain parts of the skull, such as the face and braincase, were more similar than other regions, like the mouth and jaw.

Collaborator Dr Vera Weisbecker from Flinders University, says all marsupials – including the thylacine – are born with unusually well-developed jaws relative to the rest of the head.

“Scientists think that this reduces the potential of marsupials to evolve some extreme skull shapes. However, it clearly did not prevent the evolution of the thylacine’s unusual wolf-like skull,” Dr Weisbecker says.

Another finding was that these regions develop from known groups of cells in the early embryo.

These observations complement our other findings that the thylacine and wolf have evolved similar instructions in their genome which influence cranial stem cells during development. 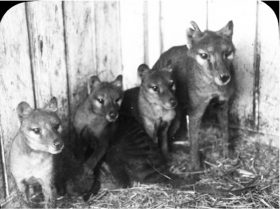 A thylacine with three cubs at Beaumaris Zoo in Hobart, 1909. Picture: Tasmanian Musuem and Art Gallery.

Together, these findings highlight that the thylacine and wolf have evolved a similar genetic blueprint and developmental strategies to generate their similarities in skull shape which arise at the earliest stages of development.

Collaborator Dr Christy Hipsley from Museums Victoria, who specialises in CT scanning and previously worked with our team to sequence the thylacine genome, notes that this is yet another example where 3D imaging can reveal hidden diversity in nature.

“By comparing the entire growth series from newborns to adults, we were able to visualise tiny differences in development that pinpoint when and where in the skull adaptations to carnivore arise on a cellular level.

“This finding was only made possible through museum loans of preserved specimens, in this case from as far away as Alaska.”