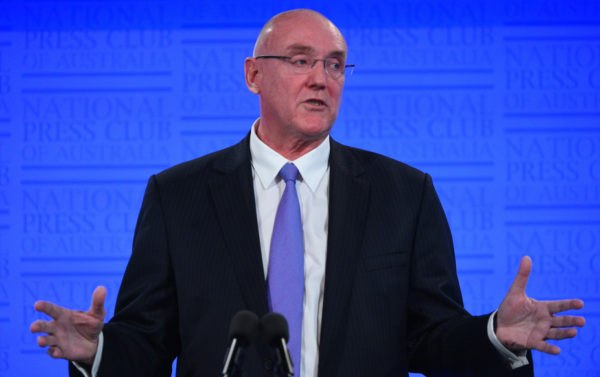 Universities Australia chair Barney Glover will launch a defence of the value of expertise and evidence. Mick Tsikas/AAP.

The chair of Universities Australia, Barney Glover, will issue a strong warning against the trend of to deriding experts in our populist, “post-truth” age. He will say the turn in public debate is a challenge for universities.

“In Australia and around the world, we’ve seen the emergence of a creeping cynicism – even outright hostility – towards evidence and expertise,” Glover says in an address to be made to the National Press Club on Wednesday. Extracts of the speech have been issued.

“Ours is an era in which evidence, intellectual inquiry and expertise are under sustained attack. The phases ‘post-truth’ and ‘alternative facts’ have slipped into common use,” he says. “Agendas have displaced analysis in much of our public debate. And we are all the poorer for it.”

Glover mounts “a case for facts as they are grounded in evidence, not as fluid points of convenience employed to cover or distort a proposition”.

“My plea to you all is this: let’s not deride experts, nor the value of expertise. Because in an era where extremists and polemicists seek to claim more and more of the public square, our need for unbiased, well-researched information has seldom been greater. We must remind ourselves of how human progress has ever been forged.”

Academics and journalists have a common cause, he says. “For how are we to fulfil our respective roles in a democracy if we don’t defend the indispensable role of evidence in decision-making?”

He cites the post-Brexit declaration by British Conservative MP Michael Gove that “the people of this country have had enough of experts”.

“And yet – as we strive to cure cancer; save lives from preventable diseases; navigate disruption; lift living standards; overcome prejudice, and prevent catastrophic climate change – expertise has never been more important.”

Glover says the turn public debate has taken is a challenge for universities.

“As institutions for the public good, we exist to push the frontiers of knowledge. We enhance human understanding through methodical, collaborative, sustained and robust inquiry.”

“That doesn’t discount the wisdom of the layperson. And it doesn’t mean universities have all the answers.”

“But we are unequivocally the best places to posit the questions. We are places structurally, intellectually, ethically and intrinsically premised on confronting society’s most complex and confounding problems.”

Universities have another crucial role in this era of alienation, which goes to the heart of economic opportunity and social cohesion, Glover says.

“Disruption is drastically refashioning the economy.”

“In this constantly transforming environment – where major structural shifts in the economy can profoundly dislocate large segments of society – our universities perform a pivotal role.”

“Universities help us make the very best of disruption, ensuring we are able to ‘ride the wave’. And they are the institutions best equipped to buffer us against the fallout.”

“This is particularly important in regions that have relied for decades on large-scale blue-collar industries,” Glover says. He points to one-time manufacturing strongholds such as Geelong in Victoria, Mackay in Queensland, Elizabeth in Adelaide’s northern suburbs, Wollongong and Newcastle in New South Wales and Launceston in Tasmania.

“These communities have been wrenched economically, socially and at the personal level by automation, offshoring and rationalisation. For places like these, universities can be a lifeline.”

Glover will also announce that Universities Australia is launching a new indigenous strategy, with targets as part of closing the gap in education.

“On participation: we will maintain an Indigenous student growth rate that is at least 50% above the growth rate of non-Indigenous enrolments, and ideally 100% above.”

“And on completion: we will work to achieve equal student completion rates – by field of study – by 2028.”

Australian universities have 74% more Indigenous undergraduate students than in 2008. But while Indigenous people are 2.7% of the working age population, they are only 1.6% of university students.