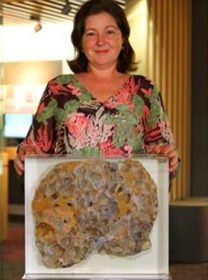 Fiona Murray with the liver she donated to the University of Queensland’s Integrated Pathology Learning Centre.

Fiona Murray’s liver was large. So large people would often ask her when her baby was due.

A healthy human liver weighs about 1.5 kilograms, but Murray’s weighed a massive 12.08 kilograms when it was removed.

“When I actually had the operation I said, ‘can somebody take a photo of it for me’ but they took one step forward and said, ‘well actually, the fellow in pathology said could we actually have it for the museum’,” she said.

And after receiving a donor liver and kidney herself, Murray said she jumped at the chance to donate her own to science.

The Brisbane woman’s liver was donated to the University of Queensland’s Integrated Pathology Learning Centre, where she said students can now use it as a learning tool.

“If someone’s donating to me, for me to live and do all the things that I love to do so if someone would like to learn from my donation, then that was pretty much just giving the gift of knowledge,” she said during DonateLife Week.

Murray, now 47, was diagnosed with polycystic kidney disease when she was 25 years old. When she was in her 30s the disease spread to her liver, which continued to grow.

“(It was) rather uncomfortable, it’s pretty much like being pregnant for years and years,” she said.

Strangers would often ask her when she was due, but rather than get annoyed, Murray said she would use it as a way of bringing up the topic of organ donation.

“I didn’t get sick of that totally; sometimes it was just more of an avenue to tell people, ‘oh no that’s not a baby bump, it’s actually polycystic liver due to polycystic kidneys and I need a donation of a liver and kidney.”

While Murray said she didn’t feel particularly unwell, she realised her condition was serious when dialysis failed to improve her health.

“It was making it worse: I lost a lot of weight, I was cramping up on the chair, my liver was so big it was encroaching and sitting and suffocating all the other organs when I was sitting on the dialysis chair,” she said.

She was on the transplant list for just a couple of weeks before receiving a donor kidney and liver in early 2014.

As well as being able to now bend down and do up her own shoelaces, Murray said she had been enjoying the freedom the transplant had given her.

“Life now is my own journey, I don’t have to think about having to go on dialysis, I can do whatever I want now, I can choose,” said Murray, who has just completed a course in medical administration and plans on studying to be a radiographer.

Murray said she corresponded with her donor’s family via letters for privacy reasons, and she was grateful to them for their decision to donate their loved one’s organs.

“Their decision in a time of grief is not for nothing and I thank them very much,” she said.

She said it was important that anyone wanting to donate their organs discuss their decision with close family.

“If you’ve already told your family that if you would like to be a donor, then it makes the decision for them hopefully less stressful … during that time of grief,” she said.

“It’s such a generous donation that is given to people like myself, and it’s always so wonderfully appreciated.”