You are here: Home » Articles filed under: 'News' » Article: 'US museums are reopening:'

US museums are reopening: 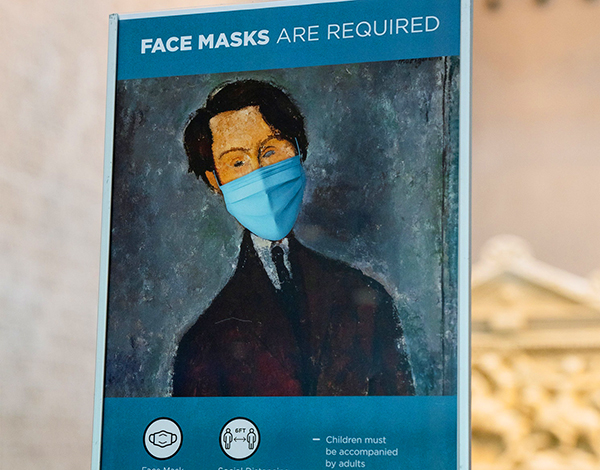 Sign at Museum of Fine Arts, Houston, as it prepared to reopen to the public on Saturday. (That’s Amedeo Modigliani’s 1916 “Portrait of Léopold Zborowski,’’ bemasked.) Credit…Bryan Schutmaat for The New York Times.

As museums around the country prepare to reopen, the Museum of Fine Arts, Houston, is going first with safety protocols in place.

You won’t be able to use the drinking fountains, check your coat or eat in the cafe. You will have to wear a mask, submit to a temperature check and agree to leave if you show signs of illness. These are the requirements set by the Museum of Fine Arts, Houston, when it reopens on Saturday, the first major arts institution in the country to welcome the public back since the outbreak of the pandemic.

“We’re getting as many as 90 to 100 calls a day — ‘When are you opening? I want to see my favorite works of art,’” Gary Tinterow, the museum’s director, said. “That’s our mission, that’s why we exist: to facilitate those encounters between works of art and individuals. And I fully believe that we can create as safe an environment as possible.”

As several states begin to reopen, their museums are carefully doing the same, with new policies and protocols in place: The San Antonio Museum of Art on May 28; the Boca Raton Museum of Art on June 3; the Wichita Art Museum on June 23; the Cleveland Museum of Art around June 30.

Their plans have been devised in consultation with state officials as well as in conversation with other museums. The Association of Art Museum Directors has helped connect institutions that have shared documents on reopening plans. Museums have broken out into working groups by region to strategize. 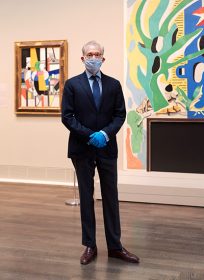 The Wichita Museum, for example, said it picked up from the Milwaukee Art Museum the idea of having visitors agree to a code of conduct that includes wearing masks and keeping six feet apart. Wichita also expects to remove benches from its galleries and to keep its cafe at under 50 percent capacity.

The unpredictability of the coronavirus trajectory has made reopening dates something of a moving target. Wichita was originally going to reopen June 1, then pushed the date three weeks. The Metropolitan Museum of Art said in March that it would reopen in July; then on Tuesday it announced that the date had moved to mid-August, or possibly later.

The Met is due to turn its Breuer building over to the Frick in July, so the short-lived Gerhard Richter show may well not reopen.

Some museums have reopened in Europe, where coronavirus infections are declining. Museums in the United States are reopening even in states where infections are on the rise.

In Texas, for instance, museums were given permission to reopen as of May 1, although on May 16, the state recorded its largest single-day increase in virus cases. In Houston’s Harris County, which has had a comparatively low death rate, the Fine Arts museum waited until it had firmed up protocols and obtained necessary supplies, Mr. Tinterow said, including “500-gallon barrels of sanitizer, tens of thousands of masks and gloves for staff interacting with the public.”

The museum, which will have timed-entry ticketing to ensure that the number of visitors is capped below 25 percent, also coordinated with other institutions in the area, namely the Houston Museum of Natural Science, which opened on May 15 and the Holocaust Museum, which is reopening May 26. 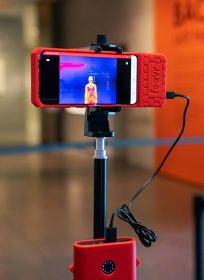 Digital temperature sensor for screening visitors at the Museum of Fine Arts, Houston.Credit…Bryan Schutmaat for The New York Times.

The Children’s Museum of Houston plans to open June 1 without 48 interactive components, including a three-story climbing structure; with attendance limited to 560 a day, compared with its typical 5,000 to 6,000; and with a face mask requirement enforced by a uniformed off-duty officer.

The museum has developed a new “epic adventure” scavenger hunt with a clearly designated path and individual kits of crayons and paper. “Every child will have that bag and go home with it,” said Tammie Kahn, the executive director. “That prevents them from having to share a lot of materials.”

The Nasher Sculpture Center in Dallas, which plans to open around July 4, is also coordinating closely with its neighbors in the city’s art district. “We don’t see this as a race,” said Jeremy Strick, the director. “There is not necessarily glory to be found in being first.”

In addition to placing sneeze guards at the reception desk, the Nasher is considering installing motion-activated faucets in its restrooms and coating the door knobs in copper, which has antiviral properties. “I think everyone is assuming that there is going to be a learning curve,” Mr. Strick said. “If we can profit from that learning, that will be to everyone’s benefit. We want to do everything we can to get it right.”

Although Ohio’s bars and restaurants were permitted to reopen Thursday for dine-in service, the Cleveland Museum of Art is looking to state officials for guidance before determining an opening date. “There isn’t much we can say until after Ohio Governor Mike DeWine gives us a green light and issues his order making it clear exactly what we may and may not do,” said William M. Griswold, the museum’s director. 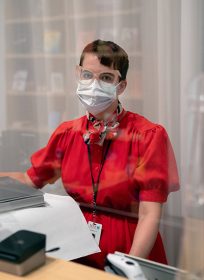 Madeline Carr, an employee, at the gift shop of the Museum of Fine Arts, Houston, behind her acrylic shield.Credit…Bryan Schutmaat for The New York Times.

The Whitney Museum of American Art is also awaiting direction from New York’s governor, who has said cultural institutions will be in Phase 4 of the reopening. In the meantime, Adam D. Weinberg, the director, has been part of a reopening task force of about a dozen city museums — including the Met and the Museum of Modern Art — that meets weekly online to think through best practices. “This is the silver lining in this whole thing,” Mr. Weinberg said. “It’s encouraging all of us to be more cooperative and more collaborative.”

The Whitney is considering changing the traffic flow in its staircases (there will be one for people going up; one for those going down) and its elevators (the small one will be reserved for elderly visitors; the large one will require social distancing).

Mr. Weinberg predicts that museums, where possible, will emphasize outdoor sculpture (the Whitney is proceeding with a public art project by David Hammons on a reclaimed pier facing the museum) and at first expects to serve visitors from surrounding neighborhoods. Tourists aren’t expected back anytime soon.

“The first six months that we open, we are going to become quintessentially local organizations,” Mr. Weinberg said. “The majority of people are going to come by foot or by bike rather than public transportation.”

Although the Whitney is projecting a deficit, his first in his 17 years as director, Mr. Weinberg said he is considering making the museum pay-what-you-wish for all New Yorkers.

“It’s important for us to be here for the city,” Mr. Weinberg said. “I think we have to represent that in some way.” 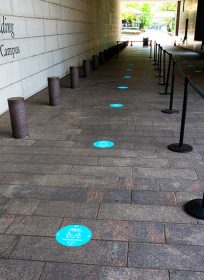 Social distancing signs on the floor of Museum of Fine Arts, Houston.Credit…Bryan Schutmaat for The New York Times.

The Walker Art Center in Minneapolis, which has performing arts and cinema spaces, is planning a phased reopening, starting with indoor galleries sometime this summer. “Once we can gather more people, we will see how things go,” said Mary Ceruti, its executive director.

The Pérez Art Museum Miami, which is preparing to reopen on Sept. 1 with plans that include new digital ticketing, is feeling somewhat hamstrung. “We’re a place that’s pretty community-centered and we’re proud of that,” said Franklin Sirmans, the museum’s director. “When there is a hurricane down here, we collect supplies to help distribute to people in need. And with this crisis, we haven’t been able to do the kind of things we feel go above and beyond.”

But museums also see their role as a place to gather when people begin to venture out of their homes. “Hopefully, the arts are going to lead the way,” Mr. Weinberg said. “People are really isolated right now and they want community. Museums are a place where they can at least be in spaces with people, but not right next to or on top of people.

“They also want to get out of themselves and art can take you to other places,” he continued. “They need to be transported both physically and psychically.”

These days, weaknesses can also become a strength. Mr. Tinterow — who used to work as a Met curator — does not have to worry about social distancing for droves of returning visitors, given his museum’s limited tourist traffic.

“For eight years that I’ve been in Houston, I’ve been yearning for the crowds that I knew at the Metropolitan Museum of Art,” he said. “Now, for the first time, I’m grateful that I don’t have them.”