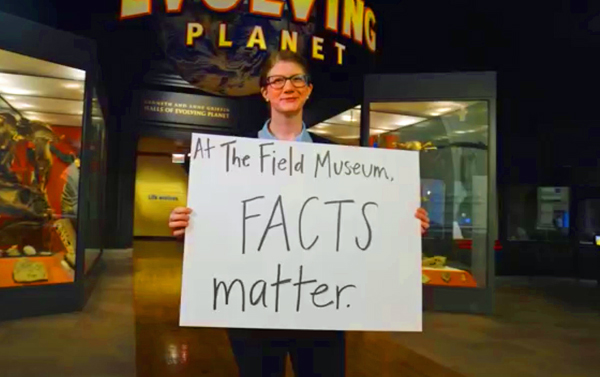 First the National Parks went rogue, sharing climate change data on Twitter. Now museums and libraries have taken up arms — or at least typing fingers — to fight on behalf of facts.

Using the hashtag #DayofFacts, more than 280 scientific and cultural institutions are devoting Friday to dropping 140-character truths on Twitter. Many of the facts seem pointedly political — like the National Museum of American Jewish History’s tweet about a George Washington letter affirming religious freedom in the country, or a placard held up in a video by Chicago’s Field Museum that stated “Climate change is accelerating the extinction of plants and animals.”

The political undertone is the goal, according to Alli Hartley, a museum educator from Virginia who helped organize the campaign with her colleague Mara Kurlandsky.

By midmorning Friday, the hashtag was trending in the United States.

The idea for a “Day of Facts” came to Hartley a few weeks ago, just after President Trump took office. The National Park Service Twitter account had been temporarily shut down after it retweeted an image comparing inauguration crowd sizes. Then senior adviser Kellyanne Conway tried to explain the dust-up over the attendance by saying the administration had “alternative facts.” Then an ex-employee at Badlands National Park briefly took control of the park’s twitter account to fire off a series of factual tweets about climate change. The missives were quickly deleted, but other parks (and a cadre of “alt” twitter accounts) took up the cause.

“I thought it was brilliant in that there was no way an administration or anyone could question it, because on one level it wasn’t political, it was just sharing factual content. But on another level it really resonated with the political moment,” she said.

She reached out to Kurlandsky, who oversees digital engagement for the National Museum of Women in the Arts in Washington, and asked for help organizing a social media campaign. Pretty soon they had a website, a twitter handle and a following that included the Newseum, the Cleveland Museum of Natural History, the National Aquarium, even the Encyclopaedia Britannica, along with dozens of smaller museums and public libraries nationwide and even worldwide.

“Given the political discourse and discussion about alternative facts and fake news, it’s important for museums to remind people … we’re here as trusted sources of information and facts are important and truth is important,” Hartley said.

She and her colleagues were wary about calling the Day of Facts a form of “resistance.” Most museums rely partly on grants from federal agencies like the National Science Foundation and the National Endowment for the Arts, and neighborhood libraries depend almost entirely on public dollars. They don’t want to put their funding at risk by running afoul of public officials. (This is why Hartley, who works for a public park system, asked that her employer not be named.)