You are here: Home » Articles filed under: 'News' » Article: 'US National Archives apologises for altering'

US National Archives apologises for altering 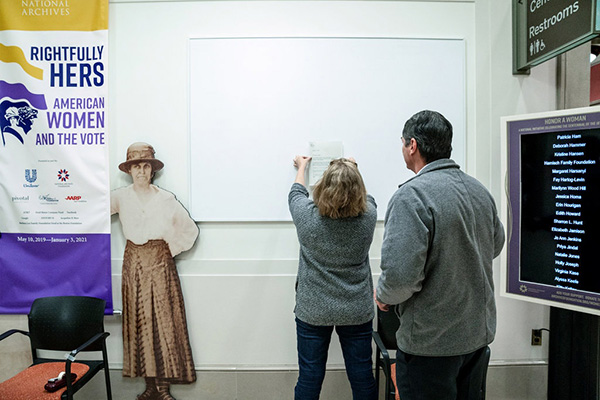 Officials on Saturday turned around a photo of the 2017 Women’s March at the National Archives that was altered and posted a statement. Credit: Leigh Vogel for The New York Times.

A photo from the march displayed at the National Archives was altered to blur signs that were critical of President Trump or might be offensive, officials said.

The National Archives and Records Administration, which calls itself the country’s record keeper, apologized on Saturday for altering a photo of protesters at the 2017 Women’s March that blurred out references critical of President Trump.

“We made a mistake,” began a statement the archives released on Saturday.

The photo of protesters holding signs was part of an exhibit, “Rightfully Hers: American Women and the Vote,” which examined the struggle of women to gain the right to vote.

But signs critical of the president that appeared in the photo — including one that said “God Hates Trump” — were doctored to blur out Mr. Trump’s name, according to The Washington Post, which first reported on the alterations.

Initially, in a statement to The Post, an archives spokeswoman defended the decision and said “modifying the image was an attempt on our part to keep the focus on the records.” 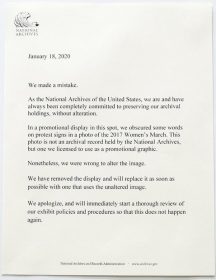 This statement was posted on the back of a photo that was turned around on Saturday at the National Archives.Credit…Leigh Vogel for The New York Times.

“As a nonpartisan, nonpolitical federal agency, we blurred references to the president’s name on some posters, so as not to engage in current political controversy,” the spokeswoman, Miriam Kleiman, said.

But by Saturday afternoon, three museum officials were seen turning around the photo display, which was a lenticular image that from one perspective showed the 2017 Women’s March and from a different perspective shimmered to a 1913 photo of a women’s demonstration on Pennsylvania Avenue.

The display was positioned so that only a blank canvas could be seen. Officials then posted a statement to the public that also apologized for the alterations.

“In a promotional display in this spot, we obscured some words on protest signs in a photo of the 2017 Women’s March,” the statement said. “This photo is not an archival record held by the National Archives but one we licensed to use as a promotional graphic. Nonetheless, we were wrong to alter the image.”

The statement said the display would be replaced “as soon as possible with one that uses the unaltered image.” It also said that a review would begin immediately into what happened.