You are here: Home » Articles filed under: 'News' » Article: 'US Philanthropy' 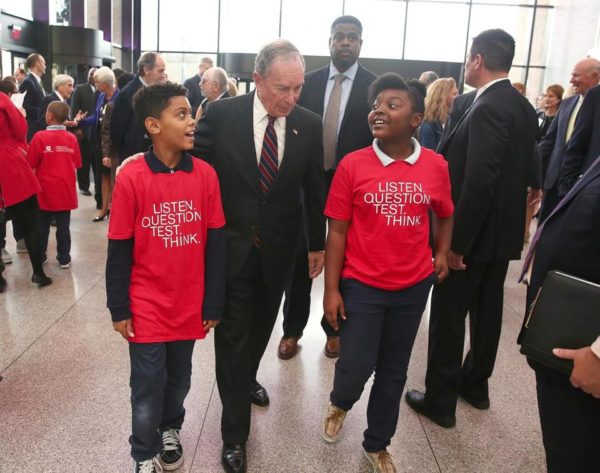 Michael R. Bloomberg (center) walked through the Museum of Science on Tuesday.

Shirley Leung, With $50m, Bloomberg thanks Museum of Science, The Boston Globe, 18 October 2016

Everyone around here knows Michael Bloomberg as the kid from Medford who went on to do big things. He built a multibillion-dollar company and served as a three-term mayor of New York.

But what people might not know is that Bloomberg credits the Museum of Science for helping to shape who he became.

“I went every Saturday, and it changed my life,” recalled Bloomberg, 74, who attended classes there starting when he was about 10 and through his high school years.

“It just showed me the possibilities and showed me what was out there in ways that traditional school didn’t do.”

On Tuesday, Bloomberg will be back in Boston to reveal that his foundation, Bloomberg Philanthropies, is donating $50 million to the museum, the largest gift in the institution’s 186-year history, one that will ensure that generations to come will benefit from the kind of programs Bloomberg grew up with.

For Museum of Science president Ioannis Miaoulis, the gift is a reminder of how the museum is as much an educational institution as anything else. The museum is one of the biggest producers of engineering curriculum for elementary students, reaching 10.5 million children and 122,400 educators over the past decade alone.

“The museum is not only a great institution in Boston, but it is also a worldwide leader in transforming education throughout the country and the world,” Miaoulis said. The gift “will help us create new programs, and it will be a tremendous boost in the education both inside the museum and outside the museum.”