You are here: Home » Articles filed under: 'News' » Article: 'V&A at the Venice Architecture Biennale'

V&A at the Venice Architecture Biennale 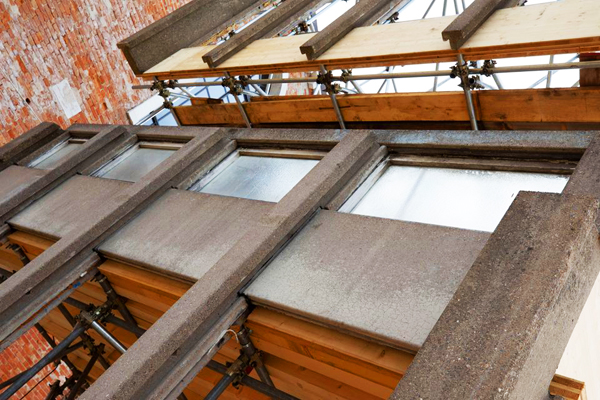 Close-up of the reassembled fragment of the façade of Robin Hood Gardens, Pavilion of Applied Arts, at the Venice Architecture BiennaleVictoria and Albert Museum, London.

Tristram Hunt, Displaying the ruins of demolished social housing at the Venice Architecture Biennale is not ‘art-washing’, The Art Newspaper, 28 May 21o8

The V&A acquired a fragment of London’s Robin Hood Gardens before it was demolished.

Among the many wonders of the Victoria & Albert Museum (V&A) in London is our collection of historic rooms—from the 18th-century Norfolk House Music Room to Charles Rennie Mackintosh’s Oak Room (currently being reassembled at V&A Dundee). To this collection, we added last year a three-storey façade and interior flat fittings from Alison and Peter Smithson’s 1970s New Brutalist masterwork, Robin Hood Gardens, a social-housing complex in east London that is currently being demolished.

The acquisition has inspired our contribution to this year’s Venice Architecture Biennale (until 25 November), in response to its theme of Freespace. Concrete elements from the façade will be displayed outside the pavilion; inside, a panoramic film commissioned from the South Korean artist Do Ho Suh will document the estate’s architecture and the lives lived there. Through additional archival images and film, the exhibition explores the Smithsons’ utopian vision to build “a model, an exemplar, of a new mode of urban organisation”.

This is not the first time that Robin Hood Gardens has featured at the Venice Biennale. In 1976, the Smithsons’ exhibition Sticks and Stones included a billboard-sized photograph of the complex and a bench based on one of the concrete columns that articulate the façade of the building. “A building under assembly is a ruin in reverse,” they wrote at the time. Now that the “ruin in reverse” has become a real ruin, the V&A pavilion asks what lessons we can learn when the contemporary challenge around social housing is so urgent.

Yet we have encountered siren voices on the cultural Left and Right opposed to the entire project. Critics think that the V&A has no place acquiring such an ugly display of Brutalist Modernism. What is more, they argue, Robin Hood Gardens was part of a failed social experiment of inhuman Modernism, which we should not be using public funds to embalm. However, our role is to think beyond fashion and to preserve that which has significant design merit, and with which future generations will seek to engage.

More interesting is the accusation of some critics (not current or former residents of Robin Hood Gardens) that acquiring and exhibiting a section of the estate validates the so-called “social cleansing” taking place in east London. Better that the architecture is lost forever, they assert, than to be involved in “art-washing” gentrification and the dispersal of local communities.

Leaving aside the new social housing planned for the site or the constructive role that cultural institutions can have in promoting much-needed urban regeneration, behind this critique is the increasingly popular conviction that not only can museums not be neutral sites, but that they also have a duty to be vehicles for social justice. Rather than chronicling, challenging and interpreting, we should be organising demonstrations and signing petitions. I am not so sure. I see the role of the museum not as a political force, but as a civic exchange: curating shared space for unsafe ideas. And in an era of absolutist, righteous identity politics, these places for pluralism are more important than ever.

Where critics are right to caution us is to ensure that our focus on design does not preclude context, and that we avoid fetishising architecture devoid of its social prehistory. That is why our pavilion in Venice forms part of a broader engagement with the question of social housing, which includes further debate at this year’s London Design Festival and continued work with our near neighbours in North Kensington. It is also worth noting that the V&A has been active in east London since the opening of our Bethnal Green museum in 1872. And we will still be there long after the keyboard warriors and “art-wash” agitators have moved on to their next bout of indignation.

• Tristram Hunt is the director of the Victoria and Albert Museum, London