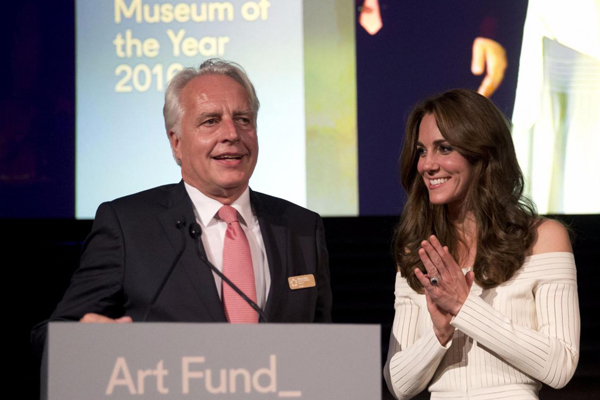 Martin Roth and Kate Middleton at the Museum of the Year Awards. Source: Getty.

He previously said of the referendum result: ‘Dropping out always means creating cultural barriers and that worries me’

The director of the Victoria and Albert Museum, Martin Roth, is to resign this week. According to The Guardian, Roth will return to his native Germany, citing ‘his disillusionment at the Brexit vote’ as the reason for his leaving the post.

Reports from newspapers in both the UK and Germany revealed he would tell V&A staff of the decision today. When appointed director back in 2011, Roth was the first foreigner to hold the esteemed position.

While exact reasons for leaving have yet to be discussed, Roth recently told German Broadcaster DW the vote to leave Europe was worrying, explaining how “Europe is simply synonymous with peace.”

The 55-year old, born in Stuttgart, continued: “Dropping out always means creating cultural barriers and that worries me.”

He previously told the BBC that the referendum felt “like skiing in very thick fog,” adding that potential funders of the museum were “asking if we can put things on hold”.

During his tenure as director, Roth achieved a record number of visitors thanks to exhibitions on the likes of David Bowie and Alexander McQueen. Almost four million people visited in 2015 alone, leading to the museum winning the Art Fund’s £100,000 Museum of the Year prize.