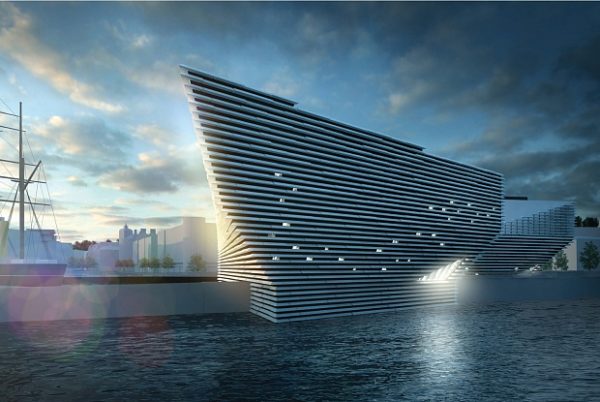 The V&A Dundee museum will be the centrepiece of the city’s £1bn waterfront redevelopment. Rendering courtesy of V&A Dundee.

On the north bank of the River Tay, Scotland’s new museum of design is taking shape. Designed by the Japanese architect Kengo Kuma, it resembles a beached ship. The first major project by a London museum in Scotland, the V&A Museum of Design Dundee represents an opportunity to show the collection of the Victoria and Albert Museum (V&A) to a new audience in the UK.

The process has not been without bumps. Since planning began in 2010, costs have nearly doubled to £80m, making the building the most expensive museum facility in the region. It is scheduled to open in 2018.

The Scottish Government and Dundee Council have funnelled millions of pounds into the project in the hope that it will regenerate the city’s waterfront and encourage tourism. Dundee—Scotland’s fourth largest city, its economy built on jute, jam and journalism—has a population of just 150,000. But Philip Long, V&A Dundee’s director, expects the new museum to attract around 350,000 visitors a year. Bob Duncan, the Lord Provost of Dundee, says the museum will “provide jobs and wider economic benefits”.

Amid the growing number of brand-name museums launching regional outposts, the arrangement between London’s V&A and Dundee is an unusual one. The V&A is allowing its name to be used in what is effectively a franchise, initially under a 20-year agreement. It is not providing any funds for the project. Long says that the London museum’s “brand reputation is enormously helpful”.

Compared to the Tate, which runs branches in Liverpool and St Ives, London’s V&A is taking a hands-off approach. V&A Dundee has its own board of trustees and makes decisions on fundraising and programming independently. The London institution does not receive a fee for its support, which includes the loan of objects and exhibitions. The V&A’s director Martin Roth says the project is “part of an ambitious programme to make our collections and expertise more widely available to the public and to promote…the UK creative economy”.

V&A Dundee aims to tell the story of design in Scotland from the 15th century to the present day. The display will include nearly 300 objects, ranging from 18th-century metalwork to Harris Tweed fabrics, and explore themes such as the impact of design on society and Scotland’s global ties.

Around two-thirds of the objects are on long-term loan from the V&A in London. The remainder will be lent by other Scottish collections, including Glasgow Museums, National Museums Scotland in Edinburgh and Paisley Museum and Art Galleries (known for its fine textile collection).

The museum will also have the largest temporary exhibition space in Scotland, one on a par with the best at major London museums. Two-thirds of the exhibitions in V&A Dundee will be coming from the V&A in London.

The cost of building V&A Dundee was originally estimated at £45m, but two years ago the project leaders raised the budget to £80m. The 78% rise in costs was attributed to the complex nature of the building, delays and design changes.