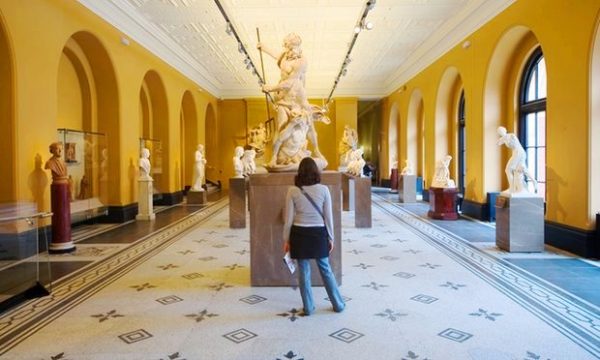 A visitor views an exhibit at the V&A museum. Photograph: Alamy.

The V&A has been named 2016 museum of the year, winning the UK’s largest arts prize, for providing visitors with what judges called an unforgettable experience.

The London museum was praised for an exhibition programme that included its most visited ever show, an Alexander McQueen retrospective, and the opening of restored permanent galleries devoted to European arts and crafts from 1600-1815.

The Duchess of Cambridge announced the winner at a ceremony barely five minutes walk away from the V&A – across the road at the Natural History Museum.

Stephen Deuchar, the director of the Art Fund and chair of the judges, said: “The V&A experience is an unforgettable one. Its recent exhibitions, from Alexander McQueen to the Fabric of India, and the opening of its new Europe 1600-1815 galleries were all exceptional accomplishments – at once entertaining and challenging, rooted in contemporary scholarship, and designed to reach and affect the lives of a large and diverse national audience.

The museum wins £100,000, the biggest museum prize in the world and the largest arts award in the UK.