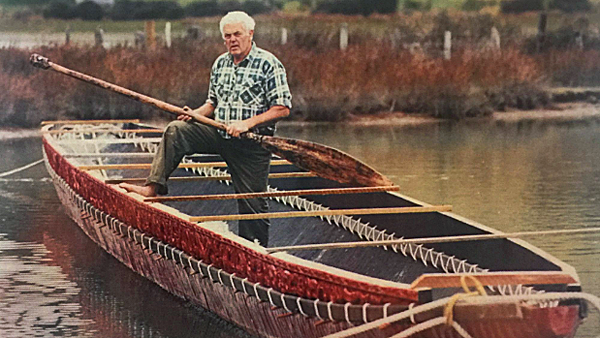 OBITUARY: A lifetime of collection has left an indelible mark on both the landscape of Banks Peninsula and the collective knowledge of anyone who met “the unofficial mayor of Okains Bay” – Murray Thacker.

Founder and chief collector of artefacts at the Okains Bay Maori and Colonial Museum, Thacker created a world of memories for people of all backgrounds at his vast and remote part of Canterbury.

Hundreds gathered to farewell Murray Thacker at a ceremony at the Okains Bay schoolhouse on Thursday, opposite the museum, to pay their respects to the community stalwart.

He was known throughout the country for his collection of Maori and colonial artefacts, which he gifted to the public by establishing the museum.

It holds one of the world’s foremost collections of Maori art, carvings and taonga. Many of the items were regularly lent to the Museum of New Zealand Te Papa Tongarewa in Wellington.

For almost 40 years, the museum and its grounds have hosted the South Island’s largest annual Waitangi Day commemoration, which attracts thousands each year.

At his funeral, Thacker was remembered as a conservationist, a historian and a man with deep compassion for his family, animals and the community he loved.

“As a family, we already miss him deeply, but we’re so grateful to have been part of his busy and varied life,” his daughter, Gillian, said.

Born on October 7, 1933, Thacker was part of an Okains Bay legacy. All eight of his great-grandparents were early settlers to the area in the mid-1800s.

He grew up in the bay and, from the age of 10, became passionate about collecting artefacts. He attended the local school before graduating from Christchurch Boys’ High School.

He set up his museum in a former cheese factory in 1977, later adding and restoring colonial buildings.

Thacker bought the local shop to ensure it remained open and the postal service kept running. He also established several houses at the museum so families could stay in the community.

As time went on, he became known nationally for his commitment to historical preservation and interest in Maori culture.

During an expedition on the Whanganui River, he was given the name “Te Tuhi,” meaning The Writer, and learned to speak Te Reo fluently.

His legacy would live on through the museum, which Hampton said would still be there in 100 years.

“The collection is, and will remain, of national significance.

“As for Murray himself, among the museum community, he was regarded as a legend,” Hampton said of his old friend.

“His knowledge of Maori artefacts and his ability to acquire artefacts that were genuine and of quality was unparalleled.”

Thacker was responsible for repatriating numerous items from overseas, taken from New Zealand during the age of discovery, Hampton said.

“He had a contact in London and, through regular communication, Murray was able to hear of all sorts of things that he would collect and bring back to Okains Bay.”

Hampton said he made a commitment to Thacker that “while I have breath I will honour that museum and it will continue as his legacy”.

“[It has] unique pieces that he had the wisdom to see and understand, that he brought back to this country. He should be saluted for that, if nothing else.”

Thacker was awarded a Queen’s Service Medal in 1977 for his service to the community.

In 2009, he was awarded the AC Rhodes History Medal, which celebrates non-academic historians who contribute to the collective knowledge of the past.