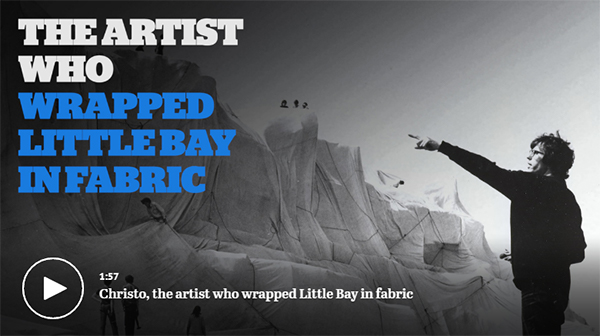 The artist Christo’s shrouding of Sydney’s coastline in billowing fabric may have only been temporary – but his influence on our country has been long-lasting.

Bulgarian-born Christo Vladimirov Javacheff, who died at his home in New York City aged 84 on Sunday, changed Australian art history when he and his wife, Jeanne-Claude Denat de Guillebon, installed Wrapped Coast for 10 weeks in Little Bay in 1969.

Philanthropist John Kaldor who co-ordinated the installation – which became the first of his influential Kaldor Public Art Projects – led the tributes, saying that Christo “not only changed my life, but that of many Australians”.

Mr Kaldor, who at the time worked in textiles, met with Christo and Jeanne-Claude, as they were known, at their home in New York to invite them to give a lecture in Australia. The pair had bigger plans and tasked Kaldor with helping them find a coastline to “wrap”.

“Their enthusiasm and charisma convinced me that that was the most important thing I could do on my return to Sydney,” Mr Kaldor said. 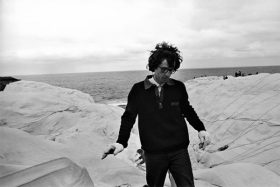 In the face of “mostly disbelief and ridicule”, Mr Kaldor helped the pair wrap 92,900 square metres of fabric and 56.3 kilometres of rope along 2.5 kilometres of coastline, and up cliffs 26 metres high, in Little Bay in Sydney’s eastern suburbs.

It was the pair’s first large-scale environmental artwork, and was at the time the largest single artwork that had ever been made. Christo and Jeanne-Claude, who died in 2009 aged 74, would go on to create many major public works including wrapping Berlin’s Reichstag and the oldest bridge in Paris, Pont Neuf; stringing a curtain across a Colorado mountain pass and hanging vinyl “gates” through Central Park in New York. Prior to 1994, credit was only given to Christo but their works were retroactively credited to Christo and Jeanne-Claude. In 2018, Christo installed 7507 barrels to form a sculpture of an ancient Egyptian tomb in London’s Hyde Park.

“Over the years Christo and Jeanne-Claude became more than good friends, they became part of the family. I was in New York when Jeanne-Claude died in 2009. I’m really saddened that I couldn’t be there with Christo,” Mr Kaldor said.

In an interview with The Sydney Morning Herald in 1969, Christo said: “Why did I start packaging? I do not know. It is not important. It will be important for history maybe, but it is not important now… It is very difficult to explain.”

For the four-week installation of Wrapped Coast, a former army major oversaw a team of 15 mountain climbers, 100 labourers and 11 art and architecture students. Among those students was Imants Tillers, who would go on to become one of Australia’s most significant contemporary artists. Mr Tillers, who was tasked with using a ramset gun to fire steel rivets to secure clips into the clifftops, described Wrapped Coast as a turning point in his career, showing him “a more serious kind of artist”.

“I think Australia had been in a deep provincial slumber until that moment and then we were kind of shocked out of it. We realised that art could be more than what we thought it could,” Mr Tillers said. 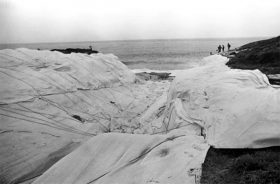 Mr Tillers did not spend much time with Christo and Jeanne-Claude as he installed the project, but when the pair returned to Australia nearly a decade later they formed a friendship. Mr Tillers described Christo as an encouraging, humble and supportive mentor. The last time he saw Christo was in December, when he was “full of beans”.

“I feel very privileged to have known him and they were a very kind couple. His work has been quite an influence on mine and I feel I do owe a debt of gratitude to him and Jeanne-Claude.”

Art Gallery of NSW director Michael Brand said Christo helped establish Sydney as a place that was “bold, gutsy and had private support for contemporary art”.

“Christo really put contemporary art in Sydney on the front page basically and brought it to many more people,” Dr Brand said.

Sydney College of the Arts director Andrew Lavery said the influence of Wrapped Coast continued to be evident in the work of Australian artists today, including in Jonathan Jones’ 2016 20,000 square-metre sculptural installation in the Royal Botanic Gardens, Barrangal dyara (skin and bones).

“It brought Land Art to Australia and with it a new paradigm, one where Australian artists began to develop audiences outside the hegemonic systems of commercial and institutional galleries,” Mr Lavery said.

For Australian artist Janet Laurence, who is known for her site-specific installations that respond to the natural environment, Wrapped Coast showed her the power of art that embraced the landscape.

“You couldn’t help but be overwhelmed at the wonder of the experience. It totally inspired me about what art could be. We hadn’t seen anything like that in Australia before,” said Ms Laurence, who was 22 when she saw the work.

A statement on Christo and Jeanne-Claude’s official Facebook page said Christo died of “natural causes” and “lived his life to the fullest, not only dreaming up what seemed impossible but realising it”. His planned wrapping of the Arc de Triomphe is due to proceed in 2021.