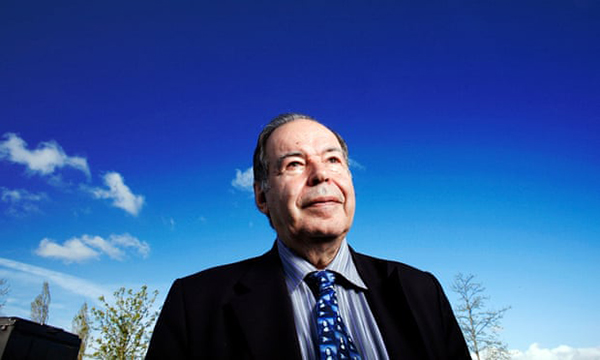 Edward de Bono in Manchester in 2007. He wanted to free people from the tyranny of logic through creative thinking. Photograph: Christopher Thomond/The Guardian.

Author, doctor and inventor of the term lateral thinking who wrote more than 60 books on his original and unorthodox theories.

The thinker and writer Edward de Bono, who has died aged 88, once suggested that the Arab-Israeli conflict might be solved with Marmite. During a 1999 lecture to Foreign Office officials, the originator of the term lateral thinking argued that the yeast extract, though proverbially socially divisive, could do what politicians and diplomats had failed for years to achieve. The problem, as he saw it, was that people in the Middle East eat unleavened bread and so lack zinc, which makes them irritable and belligerent. Feeding them Marmite, therefore, would help create peace.

Through his 60-plus books, including The Mechanism of Mind (1969), Six Thinking Hats (1985), How to Have A Beautiful Mind (2004) and Think! Before It’s Too Late (2009), as well as seminars, training courses and a BBC television series, De Bono sought to free us from the tyranny of logic through creative thinking. “What happened was, 2,400 years ago, the Greek Gang of Three, by whom I mean Aristotle, Plato and Socrates, started to think based on analysis, judgment and knowledge,” he said. “At the same time, church people, who ran the schools and universities, wanted logic to prove the heretics wrong. As a result, design and perceptual thinking was never developed.”

De Bono’s revolution began in 1967 with his book The Use of Lateral Thinking. Imagine, he said, that a money lender claims a merchant’s daughter in lieu of her father’s debt. The merchant and daughter concoct a compromise. The moneylender will put a black stone in one bag and in the other, a white. If the daughter chooses the black stone, she will be doomed to marry the moneylender and the debt cancelled; if the white she will stay with her father and the debt be cancelled. But as the trio stand on a pebble-strewn path, she notices the money lender putting a black stone in each bag. What should she do to avoid a nightmarish fate?

This is where lateral thinking – ie, employing unorthodox means to solve a problem – comes in. De Bono suggested the daughter should pick either bag, but fumble and drop her stone onto the path. “Since the remaining pebble is of course black, it must be assumed she picked the white pebble since the moneylender dare not admit his dishonesty.” 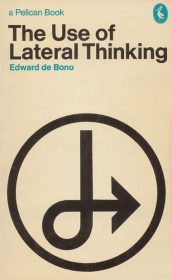 The Use of Lateral Thinking was first published in 1967. Photograph: Pelican.

What De Bono called vertical thinking, typified by logic, would be useless in reaching this elegant solution. It is lateral thinking that creates new ideas – Einstein and Darwin, according to De Bono, were lateral thinkers. “Studies have shown that 90% of error in thinking is due to error in perception. If you can change your perception, you can change your emotion and this can lead to new ideas. Logic will never change emotion or perception.”

De Bono believed humour was one of the most significant characteristics of the human mind, precisely for its basis in shifting perceptions. “Let me tell you a joke,” he said. “An old man dies and goes to hell. When he gets there, he sees his friend, a 90-year-old man, with a beautiful woman sitting on his knee. He says to his friend, ‘This can’t be hell, you’re not being punished, you’re having fun!’, to which his friend replies, ‘This is punishment – for her!’”

His most trenchant thinking concerned children’s education. “Schools waste two-thirds of the talent in society. The universities sterilise the rest,” he said. The Maltese thinker was particularly scathing of Britain, where, he claimed, rigid thinking and an obsession with testing led to many children leaving school “believing they are stupid. They are not stupid at all, many are good thinkers who have never had the chance to show it. But that lack of confidence will pervade the rest of their lives.”

Rather than teaching children to absorb information and repeat it, he argued, schools should equip them to think creatively. He once did a study in which he asked children to design a sleep machine, an elephant-weighing machine, a system for constructing a house and a system for building a rocket. His 1972 book Children Solve Problems described the results.

In Six Thinking Hats, De Bono suggested that business meetings might be more efficient if attendees wore imaginary colour-coded hats. The black hat signified negative or realistic thoughts; white, information; red, emotion; blue, management; green, creativity; and yellow, optimism. Everyone in the meeting would figuratively place a coloured hat on their heads. This way, he claimed, “ego would be taken out of the situation”. 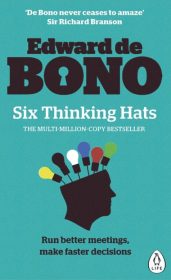 The method found its devotees. Motorola, IBM and Boeing reported cutting meeting times by half by applying it. De Bono reported that one of his clients, Ron Barbaro of Prudential Insurance, said that after suggesting an idea that executives might counter was too risky, “he would say: ‘Yes, that’s fine black hat thinking. Now let’s try the yellow hat.’”

De Bono was convinced about its importance. “The Six Thinking Hats method may well be the most important change in human thinking for the past 2,300 years,” he wrote in the preface to the book.

Certainly, he was rarely burdened with humility, informing the world that his childhood nickname was “Genius”. By contrast, he did not suffer detractors gladly. Years after a stinking review of Six Thinking Hats appeared in the Independent, written by Adam Mars-Jones, De Bono told the Guardian: “That book, we know, has saved $40m dollars and tens of thousands of man-hours. Now, some silly little idiot, trying to be clever, compared to the actual results, that just makes him look like a fool.”

Mars-Jones retorted that when his review appeared, De Bono “wrote to the editor [saying] … that he was entitled to compensation for the loss of earnings which my comments had inflicted on his lecture tours (which he assessed at £200,000). He seemed less taken with my proposal that he pay a dividend to every journalist who, by taking him seriously, had inflated his earning power.”

Born in Saint Julian’s Bay, Malta, Edward was the son of Joseph de Bono, a physician, and Josephine (nee O’Byrne), an Irish journalist. He went to St Edward’s College in Malta and jumped classes twice. “I was always three or four years younger than anyone else in my class.”

He qualified as a doctor at the Royal University of Malta before going to Christ Church, Oxford, as a Rhodes scholar to study for a master’s in psychology and physiology (1957), and a DPhil in medicine (1961). There, he represented the university in both polo and rowing and set two canoeing records, one for paddling 112 miles from Oxford to London nonstop.

Following graduation, he worked at Oxford as a research assistant and then a lecturer, taught at the University of London and became a lecturer in medicine at Cambridge (1976-83), where he did his PhD. During this time he also taught at Harvard and set up his School of Thinking in New York, in 1980. He recalled how these experiences led him to his later work: “In medicine, I was dealing with self-organising systems such as the glands, kidneys, respiration and circulation, and I started to ask myself what would happen if the same principles were applied to the brain. From psychology came an interest in thinking, and from computers an interest in the types of perceptual and creative thinking that computers couldn’t do.”

The De Bono Code Book (2000) suggested that communication would be better served if we spoke in numerical code. For example, instead of saying: “Mum, help me out, but don’t lecture me,” we might say: “Code six.” Another figure, “6/2”, means “Give me my point of view and I will give you your point of view.”

De Bono claimed that business leaders came to him “because they recognised the importance of what I was talking about”. More so, apparently, than academics. “It upsets people when I say business is more interested in thinking than universities, but it’s true.”

The pay was also better. In 1991, he set up Advanced Practical Thinking Training (now de Bono Thinking Systems) to teach corporations how to apply his ideas. It proved a remarkable success, with De Bono and a network of more than 400 instructors in 27 countries, working with major corporations including Boeing, BT, Siemens, Nestlé, Goldman Sachs, Ernst & Young and British Airways.

By 1996, APTT was on the Inc 500 list of fastest-growing American companies. In 1999, he and his brother, Peter, set up the online Effective Thinking Course. For a 1,000-plus dollar fee, you can study its 24 lessons and more than 200 thinking exercises, after which “you will be sent a high quality, hand-signed certificate via registered post” proving that you are a De Bono Master Thinker.

Such business acumen made De Bono a rich man, with homes in London, Norfolk, Venice, Ireland, Malta and the Bahamas. Artists including Peter Gabriel and the Eurythmics claimed to have benefited from his teachings, while Richard Branson called him “an inspiring man with brilliant ideas”.

His increasing fame earned him honorary degrees from Melbourne to Dundee, and Planet DE73 was named Edebono in his honour. He received Malta’s National Order of Merit in 1995.

A marriage to Josephine Hall-White in 1971 ended in divorce. His sons, Caspar and Charlie, survive him.