After heading museums in Britain and Germany, he became more politically engaged. 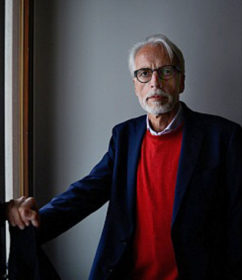 Martin Roth died yesterday (6 August) in Berlin, aged 62. When he retired as director of the London’s Victoria and Albert Museum (V&A) last October he was in good health, but cancer was diagnosed immediately after he left.

Roth remained undaunted by his illness. On 1 July, just five weeks ago, he took over as president of Germany’s Institut für Auslandsbeziehungen (Institute for Foreign Relations), which deals with cultural exchanges. After heading leading museums in Germany and Britain he wanted to become more politically engaged.

Roth had served as director general of the Staatliche Kunstsammlungen Dresden (Dresden State Art Collections), overseeing 12 museums, from 2001 to 2011. He then moved to London to become director of the V&A, where visitor numbers soared with a series of major exhibitions. He oversaw the new extension which opened this June, played a key role in developing plans for V&A East on the former Olympic site and expanded the museum’s international links.

When Roth announced his retirement from the V&A there was considerable speculation about the reasons and the speed of his departure. On timing, he told The Art Newspaper that “it’s like a love affair—once you split, you don’t want to share the kitchen table”.

We asked Roth whether he was leaving because of Brexit. “It was just an element, but definitely an element,” he said. Roth spoke out frankly: “Brexit was about telling people lies, Little England coming back, new nationalism returning to Europe, xenophobia, hate crimes.”

Privately Roth was very disturbed that UK museum directors were unwilling to speak out before the referendum in June 2016. As he put it in our interview: “It is part of our job [as museum directors] to publicly defend a civil society and the values of the past. It is not just objects we have in our collection, but values.” This belief led Roth to accept the post of chairman of the Institute for Foreign Relations.

Germany’s foreign minister Sigmar Gabriel today paid tribute to Roth by saying that he “set standards for the museum world” and was “committed to cultural cooperation”. Gabriel added: “His death, which comes much too soon, deeply affects me.”

Nicholas Coleridge, the chairman of the V&A, said that Roth “will be remembered as a man of prodigious energy; a director with a global reputation both within the museum world and beyond; a committed Europhile and cultural ambassador with a philosophical turn of mind, as well as a dedicated husband and father.”