You are here: Home » Articles filed under: 'News' » Article: 'Vale Les Murray: leading poet of his' 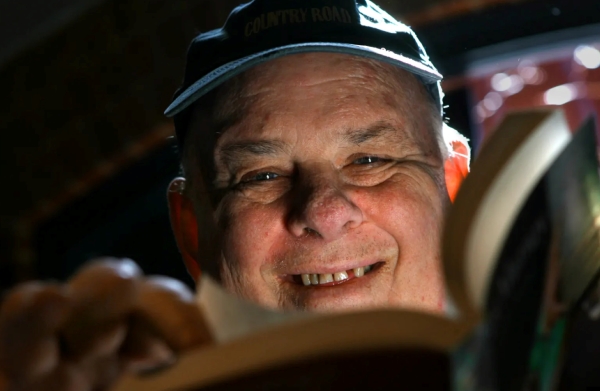 Michael Duffy, Les Murray: The leading poet of his generation and possibly of this country’s history, The Age, 29 April 2019

On the way to bury his mother in 1951, Les Murray saw an old Aboriginal man standing by the road with his eyes down and hat off.

“I was 12 then,” the poet would recall, “but that man has stayed with me, from what may well have been the natal day of my vocation as a poet, a good spirit gently restraining me from indulgence in stereotypes and prejudices.”

Murray was the leading poet of his generation and possibly of this country’s history. His power came from extraordinary poetic technique and a determination to draw for his subject matter on Australia and its past, to which he felt unusually connected by his personal history.

For many readers, he enhanced the experience of living here, by revealing a richer culture than we had known, and indeed expanding it. Many talented writers of his generation felt the need to go away; Murray did not.

Leslie Allan Murray was born on October 17, 1938 in Nabiac on the north coast of NSW, into a family of timber cutters and dairy farmers, and grew up in the Bunyah valley.

His relationship with this place, and its people, was to provide him with a standing point in a changing literary culture of fashion and uncertainty (“A man with no past has all too many futures.”) That relationship was also ambiguous and shot through with bitterness (“The price of the past is bondage to the dead.”) Three episodes in particular qualified his admiration for the bush.

For decades after his mother Miriam (nee Arnall) died, her son and only child would choose to believe it was because the town doctor had refused to send an ambulance to a poor family who lived in a shack. In fact the ambulance was not sent because Murray’s father, Cecil, had not told the doctor his wife, who was hemorrhaging badly, was pregnant. Nor would he arrange for her to be taken to town by car.

Cecil, shattered by grief for years afterwards, accused Les, whose birth had been induced, of killing Miriam. Murray ran wild for a year or two and then went to Taree High School where, a large boy with a huge brain and few social skills, he was variously ignored and bullied savagely. This had a deep effect and gave him a lifelong aversion to mobs and bullies.

From these beginnings he was tipped into another world in 1957 when he moved to the city to study for an arts degree at the University of Sydney. Other students, some of whom became good friends, included Geoffrey Lehmann, Bob Ellis, Penny McNicoll, Robert Hughes and Clive James.

Murray made a place for himself in this world, but it was not an easy one, and he suffered from a bout of the depression that would recur throughout his life. Fortunately for himself and for Australian poetry, he met Budapest-born Valerie Morelli, and in 1962 they married.

In the same year his grandfather died, and the third of what might be called Murray’s foundation stories was established. Cecil discovered he would not, as promised, inherit the farm on which he lived and where he had toiled for so long for so little.

Murray and Valerie moved to Canberra, where he became a translator at the Australian National University while working on his first volume, The Ilex Tree. It was published in 1965 and contained poems by Murray and Geoff Lehmann, and launched both their reputations. It showed Murray struggling to reconcile his past with his future, in poems such as The Away Bound Train (“But I must forget the farm, and how the seasons/ Appear and are – or else not reach the world.”)

In 1967 Murray abandoned non-literary work and went with Valerie on a trip to Europe, with their first two children. On his return he published The Weatherboard Cathedral (1969), the first of many volumes that would contain some of Australia’s best-loved poems, including An Absolutely Ordinary Rainbow (“There’s a fellow crying in Martin Place. They can’t stop him.”), The Quality of Sprawl (“An image of my country. And would that it were more so.”), and The Dream of Wearing Shorts Forever (“To go home and wear shorts forever/ in the enormous paddocks, in that warm climate”). Reviewing The Weatherboard Cathedral, Kenneth Slessor wrote that it was “full of magnificent poetry” and that Murray, “says all that Lawson and Paterson tried to say but with infinitely more passion and subtlety”.

Murray quickly became Australia’s leading younger poet. Books such as Lunch & Counter Lunch (1974, winner of the National Book Council Award) and Ethnic Radio(1977) established his reputation. His work began to be published in the Times Literary Supplement and other foreign outlets, and he was invited to literary events overseas.

Valerie worked as a teacher and in 1974 they were able to buy 40 acres of the farm from which Cecil had been evicted. Murray had a small prefabricated house built on “our beautiful deep land”, and the next year Cecil moved in.

The Murrays spent their holidays at Bunyah, and in 1976 Murray wrote one of his great works, The Buladelah-Taree Holiday Song Cycle, based on Aboriginal oral poetry and, like it, seeking to bring the land alive by speaking of it.

Although Murray didn’t fit in with the fashionable ideas of the 1970s (at university he’d converted to Catholicism), there proved to be a strong audience for his sophisticated renewal of traditional values, which he could provide with an authentic imagery less available to his more gentrified and urbanised colleagues, many of whom became distracted by more “modern” poetic concerns from America.