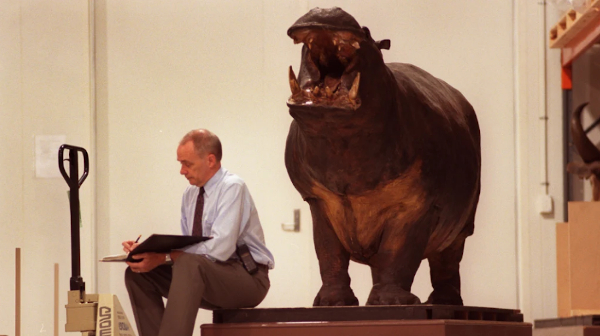 Man of kindness, integrity and knowledge, The Age, 29 October 2019

Martin’s career was long, distinguished and recognised by various awards, including the Commonwealth Public Service Medal 2016 for outstanding contributions to improving the understanding and protection of cultural heritage in Victoria, and the 2016 Museums Australia (Victoria) individual award for lifetime achievement.

A gentle and purposeful person, Martin’s capacity for connection was remarkable and his effect on the personal and professional lives of the people he encountered is perhaps his greatest legacy. When colleagues describe Martin, a mentor of many, certain sentiments appear again and again, “leader without peer”, “dedicated”, “wise”, “warm”, “kind”, “genuinely interested”, “helped me into the place where I could make the greatest contribution”.

Martin was instrumental in shaping Victoria’s contemporary museum landscape – through physical and digital infrastructure. He worked on the merging of the Science Museum of Victoria and National Museum into the Museum of Victoria in 1983, and in 1989 was a key participant in the development of Scienceworks at Spotswood. In the 1990s, Martin played a leading role in the development and construction of Melbourne Museum, particularly in the relocation of the state collection of 18 million artefacts.

Simultaneously, he was an early adopter of digital technology and champion of public access to cultural collections. In the early 1980s, he was closely involved in the creation of the electronic cataloguing systems, Texpress and Emu, now used by museums worldwide. In the early 1990s, he led the Australian Museums and Galleries Online (AMOL) project, the first online museum database in Australia.

In the last decade of his career, in his senior arts officer role at Creative Victoria, Martin worked on the establishment of the Culture Victoria website and was instrumental in gaining support for the Victorian Collections website. This work provided public access to more than 200 stories and more than 600,000 collection items drawn from more than 52 museums.

Martin’s leadership and vision for connected portals between Australia’s museum collections leaves a legacy that will ensure continuing public access (including in a disaster-recovery role) to the items and stories of our communities.

Tumultuous events surrounded Martin’s beginnings. He was the second child born to an artistic, piano-teaching mother and a father serving as a flight lieutenant during World War II. Shortly before Martin’s birth, in the lead-up to VP Day August 1945, his mother was told her husband was missing in action, presumed dead. His father did arrive home safely more than a week later, radio silence creating the misinformation.

Martin’s subsequent arrival seemed marked by the gravity of these events as he was always intensely engaged with living a simple, socially connected and ethical life.

Educated at Frankston Primary School, and later at Dandenong High School, he won commonwealth scholarships at secondary school, and scholarships to attend the University of Melbourne, where he studied agricultural science, his choice influenced by his father who, having retrained at Ormond College in theology after the war, imbued his children with the idea of service to the community.

During his university years, Martin spent vacation periods working in Vanuatu and Fiji. In 1969, he married Sue Williams. In 1970, he was awarded a master’s in agriculture from the University of Melbourne. Inspired by his vacation work and keen to teach tropical vocational agriculture, in 1971 he completed a diploma of education at the University of Sydney.

From 1972-3 he taught at Kwikila High School in Papua New Guinea, where his daughter, Sarah, was born, and then in 1974 at Goroka Teachers College. Gaining an appointment to an agricultural college in Uganda, the family returned to Melbourne to prepare for the move.

But the political situation in Uganda made the position untenable. Martin’s second daughter, Rebecca, was born at this time. In April 1975, he was offered a position at the Science Museum of Victoria, the beginning of a 40-year career characterised by generous leadership, innovation and intelligent, strategic service.

During that career, Sue died of pancreatic cancer. Martin was fortunate to experience great love again with his second wife, Liza Dale, and was a loving stepfather to her two children, Marie and Robert.

Martin believed in the inherent creative capacity in each individual and had a deep love of music, listening or playing, singing in choirs or directing them. During secondary school, he was an outstanding classical pianist, competing in the Melbourne Concerto Competition. In his 20s, with friends, he formed a rock band called The Sleepless Nights, and played lead guitar.

Martin loved the natural environment, strongly influenced by his mother’s passion for Australian orchids, bush plants and animals. Martin and Liza pursued this joint interest, travelling rural Australia extensively. One of Martin’s final, creative pleasures was 10 days of en plein air painting with Liza in the winter light in various locations around Castlemaine.

Martin had a continuing interest in things of the spirit, reading widely in ethics and religion, and for a period attended Quaker meetings. He acknowledged the numinous in life and respected the mysteries, awe and wonder of existence. He faced life with courage and hope and brought these qualities into his relationships with friends and colleagues.

Martin believed in servant leadership as the way to work for the public good. He felt greatly privileged to work in the cultural sector, which he saw as having a profoundly important role in developing a society of citizens who can understand their environment and their lives in meaningful ways. Martin’s career was shaped by his integrity, purpose and commitment to community engagement and empowerment, and it is these motivators that made his impact so positive.

He was a loving sibling to his brothers, Robin and Mark, sister, Hermina, and foster sister, Inez de Boer.

A celebration of Martin’s life will be held 2-5pm on Thursday, October 31, at the Castlemaine Art Museum.

This tribute was written by Hermina Burns, Liza Dale-Hallett and Eleanor Whitworth.