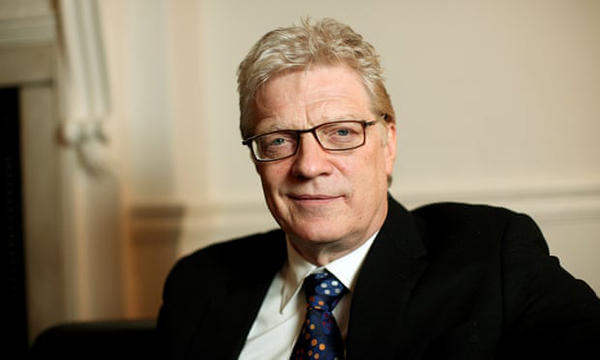 Ken Robinson in London in 2005. In California the following year he said: ‘Our education system has mined our minds in the way we strip-mined the earth for a particular commodity.’ Photograph: Graeme Robertson/The Guardian.

Educationist who argued that children’s creativity is stifled by school systems that prioritise academic achievement.

The educationist Sir Ken Robinson, proponent of the encouragement of creativity among children, who has died aged 70 of cancer, was largely ignored by politicians of both main parties as he insisted that the policy of successive UK governments, that literacy and numeracy should predominate, was a false priority. As he told interviewers: “That’s like saying let’s make the cake and if it’s all right we’ll put the eggs in.”

Reputedly one lesson can change the course of a pupil’s career – Robinson became an exemplar of the much rarer idea that one speech can change a teacher’s whole trajectory. It was an off-the-cuff, 19-minute address without notes entitled Do Schools Kill Creativity? at a TED (technology, entertainment and design) educational conference in California in 2006 that propelled him to something approaching worldwide celebrity within and beyond education.

His wry and witty extempore style, honed in Liverpool, was characteristically engaging. Subsequently posted on YouTube, the talk has reputedly been viewed by 380 million people in 160 countries and has influenced schools around the world.

In that speech, and at other less noticed conferences and less well-attended seminars over many years, Robinson argued that children do not grow into artistic creativity but are educated out of it by school systems that prioritise academic achievement and conformity instead of liberating imagination and initiative.

He told the audience in 2006: “I believe our only hope for the future is to adopt a new concept of human ecology, one in which we start to reconstitute our conception of the richness of human capacity. Our education system has mined our minds in the way we strip-mined the earth for a particular commodity. We have to rethink the fundamental principles in which we are educating our children.”

Understandably, this was much more enticing to the education profession than it was to government ministers, but it was based not on a single speech but Robinson’s whole career in academic education, which culminated in a professorship at Warwick University (1989-2001) before he became a senior adviser to the J Paul Getty Trust in Los Angeles.

If the argument was that individual creativity was stifled by the system, it was less easy to discern how that might be recreated within a state education with its emphasis on attainment targets and examination results. The Blair government at least invited him to chair an inquiry in 1997, which produced a report, All Our Futures, but then largely ignored it; while Michael Gove as education secretary and his special adviser Dominic Cummings chose snide derision to dismiss the establishment “blob” of which they felt he was clearly a part. Robinson himself said in an interview with the Independent in 2018: “If I didn’t piss somebody off I’d probably be doing something wrong, but I don’t set out to do it.”

He told Kirsty Young on Desert Island Discs in 2013 that schools should have discretion to develop creativity: “Don’t treat children as the same or over-programme them, they find their talents by trying things out.”

But Robinson admitted on the programme that he had benefited from an academic education system and insisted he was not opposed to a national curriculum, but just wanted one with different priorities and parity of esteem between core subjects and artistic ones such as dance.

The fifth of seven children of Ethel (nee Allen) and James Robinson, he was born in an impoverished household in Liverpool, close to Everton’s Goodison Park football ground. His father worked at various jobs, including running a pub and as a docker, and was left paraplegic after his back was broken in a dockside accident when Ken was nine. He himself spent eight months in hospital after being diagnosed with polio at the age of four, thereafter walking with a limp, ending any chance of playing for the local club, though his brother Neil did so.

Instead, Robinson’s parents encouraged him academically. He was initially educated at a special school for children with disabilities but passed the 11-plus and attended Liverpool Collegiate school, proceeding to study for a Bachelor of Education degree at Bretton Hall College, west Yorkshire, founded by the educationist Alec Clegg, which specialised in the arts. It had a formative effect on his career and he went on to complete a doctorate in drama and theatre in education at London University.

His subsequent career focused on the arts in education, working on a schools’ council project which became his first book, Learning Through Drama (1977), and running courses for teachers. In the early 1980s he was lead researcher and author of the Arts in Schools project for the Calouste Gulbenkian Foundation and after that became the director of the Arts in Schools project, which in turn helped to shape the national curriculum after the 1988 Baker Act.

He founded and chaired Artswork, the national youth arts development agency and founded and co-edited Arts Express magazine, before joining the staff at Warwick. The invitation to join the Getty Trust in California came in early January 2001: “It was cold and wet – what would you do? We went as fast as we could.”

Robinson’s success at the TED conference, where he spoke three times over a number of years, propelled him into a different financial and celebrity league. His friend and agent Brendan Barns said: “What really set Ken apart from other speakers and educationists was his ability instantly to create rapport with his audiences. He made everyone feel he was talking to them personally.”

Robinson met Marie-Therese Watts, known as Terry, while giving a course in Liverpool in 1977. They married in 1982 and had two children, James and Kate. The couple returned to live in London last year to be near Kate and her baby daughter, Adeline.

Terry and their children survive him.