But Tristram Hunt says loans are on the table as Ethiopian treasures looted after the Battle of Maqdala go on show in London. 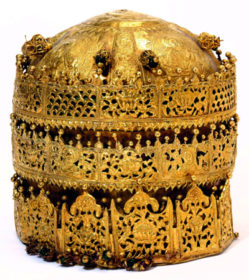 The director of London’s Victoria and Albert Museum (V&A), Tristram Hunt, made waves this week when he announced that he would be willing to lend Ethiopian treasures back to the country from which the British army looted them after the bloody battle of Maqdala in 1868.

The controversial artifacts, including an ornate gold crown and solid gold chalice, go on view in London today in an exhibition that tells the story of their seizure. It could be the first step in their return to Africa—but Hunt says that outright restitution is not on the table. Nor is a President Macron-style gesture that would include the hundreds of Ethiopian artifacts in other UK public collections, including the British Museum, British Library and the Royal Collection at Windsor Castle.

Referring to the French president’s sweeping call for African artifacts taken to Paris during the colonial era to go on show in Africa, Hunt tells artnet News: “I am skeptical of the wow-and-awe approach, having been a politician, and so I am aware of the mind set, which is political.” The historian and politician-turned-museum director prefers a scholarly, case-by-case approach, emphasizing the importance of building partnerships with institutions in Africa, and Ethiopia in particular.

The V&A also stresses that its display of 20 artifacts, which marks the centenary of the battle, has been organized in consultation with representatives from Ethiopia and the Ethiopian community in London. However, a planned meeting today with Ethiopia’s culture minister has been postponed due to political changes in the African country. After Ethiopia’s former prime minister resigned in February amid mass protests, a new leader, Abiy Ahmed Ali, was sworn in this week.

Hunt hopes that the British government will provide funding so that the V&A can work directly with Ethiopian institutions, possibly using money for development aid to build long-term partnerships. In the short term, V&A staff are due to take part in conferences this year about the Maqdala hoard.

Meanwhile, the British Library is currently showing a small display of Ethiopian manuscripts that were looted after Maqdala, but the story of the battle is not made as explicit as at the V&A. Like the V&A, the British Library has rejected restitution claims in the past. A British Library spokeswoman says that it continues to engage with the Ethiopian Embassy in London, adding that it plans to digitize some 250 manuscripts, with 25 already available online.

The British Museum has objects from Maqdala on view in its African galleries (though the sacred tablets in its holdings are never shown out of respect for their significance to members of the Ethiopian Orthodox Church). A spokeswoman for the British Museum says that its trustees would “consider any loan request for any part of the collection, subject to the usual considerations of condition and fitness to travel.”

One of the most poignant works in the V&A display is a photograph by Julia Margaret Cameron of Prince Alámayou, who became an orphan at age seven after his father, Emperor Téwodros, died in the battle of Maqdala and his mother followed just a few weeks later. The child, who was adopted by a British army officer and brought to England, died in exile at age 19. Queen Victoria was said to have been greatly saddened by his passing. Ironically, Alámayou’s father had initially hoped that the British would help him defeat his rivals.