May 19th, 2022 | Browse other: News. | Tagged with: Victoria & Albert Museum, What will happen to sanctioned Russian oligarch’s Fabergé treasure | 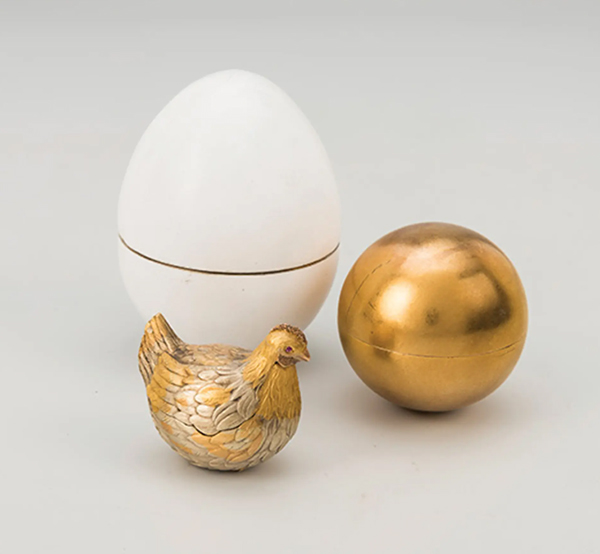 The first Fabergé Egg, commissioned in 1885 by tsar Alexander III and acquired by Russian oligarch Viktor Vekselberg, was on loan to London’s V&A for its Fabergé exhibition until 8 May. Photo: Andrey Terebenin/SHM;Fabergé Museum.

Martin Bailey, What will happen to sanctioned Russian oligarch’s Fabergé treasure, now V&A’s show has closed?, The Art Newspaper, 12 May 2022

The return of the Easter Egg on loan to the UK from Viktor Vekselberg’s Panamanian company could well now be complicated.

The Victoria & Albert Museum (V&A) is facing a sensitive situation, following the closure of its Fabergé exhibition on 8 May. The stars of the show were the Imperial Easter Eggs, one of which was bought by the recently sanctioned Russian oligarch Viktor Vekselberg, who had passed ownership to a Panamanian company.

In 2004 Vekselberg bought nine Eggs and other Fabergé items from the Malcolm Forbes collection for an estimated $100m, in a private sale through Sotheby’s. Nine years later he opened the Fabergé Museum in St Petersburg, which he funds and opens to the public. Among Vekselberg’s purchases was the very first Fabergé Egg, commissioned in 1885 by tsar Alexander III for his wife—and that was on loan to the V&A.

Known as the Hen Egg, its outer shell is just over two inches high, crafted of solid gold and faced with enamel. The two halves can be separated with a twist, and inside is a golden yolk. Open this and a plump golden hen with ruby eyes emerges. The 1885 example is particularly important historically, since it led Fabergé to eventually create 50 annual Easter Eggs for the tsar.

A second Vekselberg purchase also went on loan to the V&A, a 1913 gold and enamel cigarette box in the racing colours of the Rothschild Family. Both the egg and box are normally displayed at Vekselberg’s Fabergé Museum.

What should now happen to the two items? Together they are worth many millions of pounds. Should they be promptly returned to the museum in St Petersburg? Or should they be held in the UK following President Vladimir Putin’s invasion of Ukraine and the sanctioning of Vekselberg? 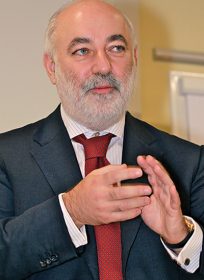 In 2004 Viktor Vekselberg bought nine Eggs and other Fabergé items from the Malcolm Forbes collection for an estimated $100m © Jürg Vollmer/Maiakinfo,

The V&A’s exhibition catalogue records both items as coming from the “The Link of Times Foundation, Fabergé Museum, St Petersburg”. But The Art Newspaper has established that their formal owner is a Panama-registered company, Lamesa Arts Inc, as documented in the UK’s Immunity from Seizure records. These state that the egg was bought by Vekselberg, with the current ownership given as “Lamesa Arts Inc, with agreement with Fabergé Museum/The Link of Times”.

Under the UK’s Immunity from Seizure system, the egg could not be “seized” by another party. But we understand that under the current UK sanctions system it is possible that it could be “frozen”.

Vekselberg, who has assets of £6.8bn, was sanctioned by the UK government on 15 March. In its announcement, the Foreign Office stated: “Individuals sanctioned today will have their assets in the UK frozen which means no UK citizen or company can do business with them.”

It is not yet clear how artworks deposited by an oligarch in a private museum in Russia and currently on loan to a UK museum would be treated under sanctions. The fact that the Vekselberg purchases are now owned by a Panamanian company adds a further layer of complexity.

If the V&A goes ahead with its plan to return the egg and cigarette box to Russia, there will still be transport problems, in the absence of direct flights from the UK. Theoretically the V&A could be asked to temporarily store the Fabergé objects or they could be handed over for safekeeping to the Russian embassy in London.

In April, Vekselberg’s $90m super-yacht Tango was seized by the Spanish authorities at Palma de Mallorca, at the request of the US Department of Justice and its Task Force KleptoCapture. The US District Court declared that the vessel was subject to “forfeiture based on violation of US bank fraud, money laundering, and sanction statutes”.

Outside the UK there have already been problems in returning loaned artworks to sanctioned Russians. A self-portrait by Pyotr Konchalovsky was on loan to the Fondation Louis Vuitton’s blockbuster exhibition in Paris, The Morozov Collection: Icons of Modern Art, which closed on 3 April. The self-portrait had been lent by Petr Aven, another sanctioned oligarch, and its return has been halted by the French authorities.

Works of art from several Russian museums on loan to international exhibitions were also temporarily held in Finland last month (including some of the other loans to the Fondation Louis Vuitton), although a few days later they were released and returned.

Yesterday a V&A spokesperson added on the Vekselberg Egg and cigarette box: “For security reasons we are not able to provide details of the arrangements for individual loans, but now the exhibition has closed we are working with the Department for Digital, Media, Culture and Sport and the lenders to ensure the safe return of the objects.”