August 13th, 2020 | Browse other: News. | Tagged with: the financial impact of lockdown and rethinking colonial legacies, Tristram Hunt on Reopening the Museum in a Dramatically Changed Cultural Landscape | 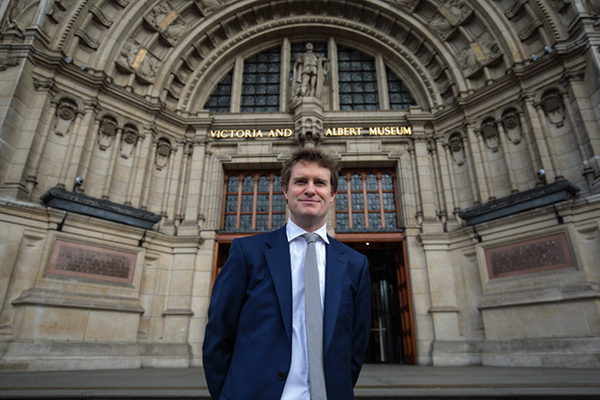 Tristram Hunt, the director of the V&A in London. Photo by Jack Taylor/Getty Images.

Naomi Rea, ‘We Will Need a New Partnership With Government’: V&A Director Tristram Hunt on Reopening the Museum in a Dramatically Changed Cultural Landscape, ArtNet, 6 August 2020

We speak to the director of the London museum about the financial impact of lockdown and rethinking colonial legacies.

The Victoria & Albert Museum is gearing up to reopen its doors today, August 6, after nearly five months of closure. A lot has happened in that time.

As the health crisis deepened in London earlier this year, the city’s museum community was forced to make the tough call to close before the government officially imposed a lockdown. The V&A shuttered on March 17, six days before London officially imposed lockdown. Since then, the museum that usually relies on visitor income to support operations has been bleeding money.

At the same time, while its doors were closed, Black Lives Matter protests ignited across the UK in response to the murder of George Floyd in the United States. Many called for the UK to address its own history of racism, from its involvement in the transatlantic slave trade and colonization to how the legacies of those histories shape contemporary society. The questions are particularly relevant to a museum like the V&A, founded in the 19th century and furnished with a collection that grew in tandem with the British empire, and all the attendant assumptions.

We caught up with V&A director Tristram Hunt about the museum’s financial situation and how it is grappling with its own colonial baggage in response to the recent protests. 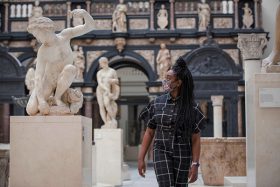 Members and staff walk through The V&A before it reopens after 140 days, the longest period of closure in the museum’s history. Photo by Tristan Fewings/Tristan Fewings/Getty Images for The V&A.

Congratulations on the reopening of the V&A on August 6. What are you most looking forward to?

Seeing the return of the crowds: the eager aficionados catching up with the Giambolognas; the friends lolling in the Madejski Gardens; the families’ first encounter with Tipu’s Tiger or the netsuke collection; the sketchers; the wanderers; and Members.

During the extended period of closure, many disturbing reports have emerged outlining the risk museums are facing due to loss of revenue. While I am sure reopening is a relief, I understand that it will take time to build the reserves back up to pre-pandemic levels. What is the V&A’s financial situation? How is the government supporting you?

As with so many other parts of the creative sector, the collapse of the visitor economy has shattered our finances. Over the last twenty years, the V&A has become an incredibly entrepreneurial museum with a booming Membership, corporate events team, world-famous shop, ace café, and, of course, a superb exhibition program. That income stream has ground to a complete halt since the COVID-19 lockdown and, as a result, we have had to use up the financial surplus we skillfully generated over the last few years.

Thankfully, government has stepped in for this financial year and we have benefited from the Corona Jobs Retention Scheme which allowed us to furlough a large number of colleagues. We have also received in-year emergency funding so we remain a solvent museum. We are grateful for that, but it is clear we will need a new partnership with Government in the years ahead so that the balance between self-generated income and public funding is more in line with the European model.

However, even with further support we will be facing some very difficult financial choices in the years ahead.

I understand the UK’s museum community has been in close communication throughout the lockdown. How are other institutions faring? Is the government doing enough to ensure the survival of the UK’s rich cultural landscape more broadly?

The £1.57 billion package for the creative industries was a serious intervention by Government into supporting one of Britain’s most successful and internationally admired industries. But as we have seen over the past few weeks, with numerous arts venues still closed and some considering redundancies, there is certainly more to be done.

I also retain a longer term concern about how Government should be encouraging creative capacity and cultural confidence in the education system. My great fear is that schools and colleges respond to the COVID crisis by stripping out art, design, music, drama and creative subjects from the schools’ curriculum.

With tightened purse strings and stalled international travel, some are suggesting that museums may have passed a peak moment of blockbuster temporary exhibitions. How do you think museum programming will change in the new normal? Will the V&A be more focused on its own collection, for example?

That said, we will certainly be seeing, around the world, fewer exhibitions which then, most likely, run for a longer period of time. With the right systems of social distancing and sanitation and air flow and crowd control, we can all enjoy temporary exhibitions again—but the current business model and ever escalating costs (of transport and build) will certainly need to be reviewed. Meanwhile, I know our curators will never lose sight of the importance of studying our 2.3-million strong collection. 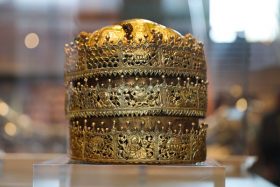 A Crown, made in Ethiopia around 1740, on view in “Maqdala 1868, A reflection on the 1868 siege and battle at Maqdala”, at the Victoria and Albert Museum in central London. The crown was taken by British troops at the siege of Magdala (Mek’dala) in 1868. Photo by Daniel Leal-Olivas/AFP via Getty Images.

There has been a widespread solidarity movement in response to the death of George Floyd in the US, which has prompted many in the UK to re-examine the country’s own histories of slavery as well as the colonial moment. You mentioned in your blog that the V&A is creating an anti-racism task force. Has this task force been created yet? What areas, in particular, will it focus on investigating? Is there a timeline for delivery on recommended actions?

It is particularly important that the V&A, as a museum born of the colonial moment, looks to itself and its practices in this vital, welcome moment of reflection and action.

Part of our response to Black Lives Matter is to ensure we are transparent about the imperial origins of some of our objects—notably the Ethiopian and Asante collections—and understand their place within the apparatus of racism. We also need to expand our collections strategy more effectively to include much more extensive engagement with contemporary makers and practitioners in sub-Saharan Africa.

And, just as importantly, we need to become an anti-racist organization within the workplace: for visitors, staff, and makers alike. So we are now consulting with staff on the Terms of Reference and Membership of the Anti-Racism Taskforce, which I would hope to have in place for September. Their work will report to the Executive Board and then our Strategic Plan. I am looking forward to some clear recommendations which we can take forward and ensure the V&A understands itself in history and its contemporary responsibilities.

In recent years, museums have faced an increasing amount of public scrutiny, whether it has been for accepting fossil fuel sponsorship, or donations from problematic sources of wealth, or for collections having their origins in wealth derived from slavery or colonial-era looting. What is it like to grapple with society’s shifting expectations of its public institutions? Has it always been this way?

Coming from a political background, where constituents and taxpayers are always demanding transparency and accountability—in often diametrically opposed ways—this heightened concern about cultural institutions’ funding or ethical stance seems only natural. However, I do think that the cultural tensions of the last decades and the whole sphere of ‘identity politics’ have obviously had an impact on the university campus and are now shaping debate in galleries and museums.

Some of this is a very democratic refusal to no longer accept cultural injunctions from on-high; on the other hand, some of it is a Left and Right populism which is opposed to ‘elite’ institutions and hostile towards legacies of Enlightenment, empiricism, and scholarship. As a national museum with a global collection, we have a responsibility which goes beyond the current political cycle to tell the story of human ingenuity and imagination expressed through material culture in the most compelling, accessible, and challenging way.

If we hold true to that mission, we will be fulfilling our purpose. Come and judge for yourselves again on August 6…