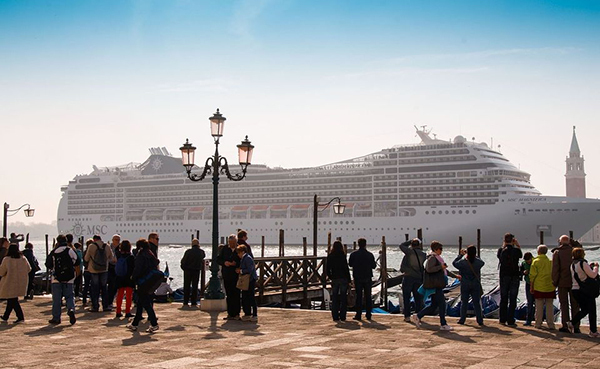 Cruise ships in Venice bring large crowds of tourists and contribute to pollution in the lagoon city © Pixabay.

A lack of a long-term plan combined with the economic benefits brought by the luxury liners means a cruise ship ban will take long to implement.

On 7 August, the Financial Times carried a widely quoted article reporting that the number of cruise ships sailing through Venice—currently about 500 a year—would be reduced by a third over the next 12 months. Unfortunately, this is not the case. Danilo Toninelli, the Italian minister of infrastructure, had merely said this was his intent and that a consultation on the subject had begun.

Nor is it the first time the Italian government has announced limits on the big ships. Decisions to that effect were taken in 2012 and 2017, but these floating apartment blocks have continued to sail down the Giudecca canal. In theory, no ships of more than 40,000 tonnes should have been coming into Venice for the past six years, but in fact, only the few that are over 96,000 tonnes have been diverted to the industrial port of Marghera.

So, what, if anything, has changed? Essentially nothing, except that the political value of the issue soared when the MSC Opera (65,000 tonnes) hit the quay side in Venice on 2 July, and the Costa Deliziosa (92,720 tonnes) had a near miss five days later, incidents that the port had sworn were impossible.

Who has the power to make the cruise ships go away? No one

The fundamental question is, who has the power to make the cruise ships go away? Certainly not Toninelli. He belongs to the Cinque Stelle party, which is the decidedly weaker member of the coalition in a government that has spent August in a constitutional crisis as hysterical as the current UK parliament. Not only does he lack political clout, but the coalition may fall apart very soon.

The mayor of Venice, Luigi Brugnaro, is a forceful man, but cannot take the decision because the port and the canals through the lagoon and the city used by the cruise ships do not come under him but central government.

The Comitatone (big committee), made up of the heads of the relevant ministries plus the mayor, which meets very occasionally to ratify major decisions regarding Venice, could be convoked if there were a stable government, but there is not.

In short, expect to see the big ships in Venice for some while yet, also because ecological, political, financial and commercial interests greatly complicate the issue. In 2017, according to the Sole 24 Ore newspaper, the cruise ships arriving in Venice generated a turnover of €410m and 4000 full-time jobs, a fact that no government is going to ignore. 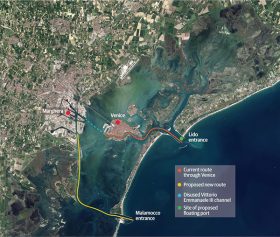 What are the options for the cruise ships?

This last option, which seems to have the most advantages, does not, however, have any powerful political backers. This illustrates, yet again, that what Venice needs most is over-arching, long-term planning that links up its various needs—ecological, touristic, socio-economic and artistic—produced and carried out by an authority with strong delegated executive powers, independent of the short-term interests and churn of changing governments.