November 18th, 2021 | Browse other: News. | Tagged with: The billboards that are turning Venice into an eyesore | 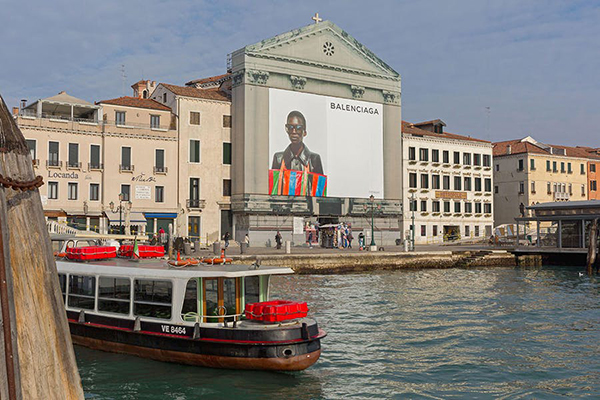 Rebecca Ann Hughes, The billboards that are turning Venice into an eyesore, Apollo, 9 November 2021

The majestic Basilica of Santa Maria della Salute overlooks the Grand Canal in Venice. Built as a votive offering in thanks for the city’s deliverance from the plague of 1630–31, it is a baroque cornucopia of pediments, pilasters, statues and scrolls. But these are currently obscured by a massive billboard advertising the high-end fashion company Bottega Veneta. Several other churches around the city have also become billboards for everything from the latest mobile phone models to expensive jewellery, provoking the ire of conservationists and heritage groups, who have contested the commercialisation of Venice’s monuments for more than a decade.

In a city affected by flooding, rising damp and subsidence, Venice’s historic buildings demand frequent restoration and repair. The giant billboards now or until recently plastered across the churches of San Moisè, Santa Maria della Pietà and San Geremia – for products ranging from OPPO smartphones to Recarlo jewellery – signal that these companies are financing the restoration of the fragile facades. The city council of Venice has in the past claimed that without the advertisements it wouldn’t be able to finance the conservation of many of these structures.

Heritage leaders and groups are not convinced. Not only are the ads an anachronistic eyesore but, as Amerigo Restucci, who oversees the conservation of St Mark’s Basilica, pointed out to local media last month, they may contravene a current regulation of Italy’s Cultural Heritage Code. The legislation states that it is forbidden to place advertising on buildings ‘protected as cultural assets’, with the caveat that adverts may be authorised if they do not damage the appearance, decor or public use of said properties.

Restucci was scathing about the current rash of oversized publicity on churches. (Although this is not a new phenomenon, it appears to have picked up pace in recent months – perhaps because council budgets have suffered amid the pandemic.) ‘In Venice, we have evidently forgotten the evangelical principle that says “merchants out of the temple”,’ he said. ‘This widespread and prolonged commodification of places of worship is not possible.’ He also questioned why the soon to be increased tourist tax was not being used to fund the restoration of churches. ‘In this way, this visual destruction would be avoided, which in my opinion also affects the tourist presence itself inside the churches, because it is difficult to be attracted to a place of worship that looks like a giant advertising billboard,’ he commented. 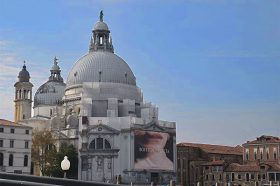 This is not the first time heritage groups have spoken out against large-scale advertising on monuments in Venice. In 2010, a giant billboard touting Coca-Cola and Bulgari appeared on the Ducal Palace, prompting an international outcry. A letter published in the Art Newspaper, with signatories including the architect Norman Foster and the heads of museums in Boston, Dresden, Stockholm and the Hermitage in St Petersburg, denounced Venice’s authorities for ‘violating’ historic buildings.

Jonathan Keates, chair of the heritage group Venice in Peril, which co-ordinated the letter, tells me that the return of the ‘maxi-publicità’ in Venice is ‘diabolical’. ‘The municipality and local and regional governments are fundamentally deaf, deliberately in certain cases, to what we and other private committees and organisations concerned with conservation say and do,’ he says. For Keates, the billboards are an example of the abuse of Venice as a ‘cash cow’, but the group’s protests are rarely heard. ‘We go on knocking our tiny fists against this short-term opportunism that is currently driving things in Venice,’ he says.

A decade ago, Rome too was scrutinised for its commercially sponsored restorations. With the Colosseum in need of a clean-up, cultural leaders cautioned against ‘vulgar’ publicity. ‘We already see that much of central Rome is beginning to look like Times Square,’ Darius Arya, an archaeologist heading up the American Institute for Roman Culture, told the BBC. The €25m restoration project at the Colosseum ended up being sponsored by high-end footwear company Tod’s. (Other luxury fashion houses have also taken an interest in the capital’s conservation, such as Fendi with its €2.2m contribution to the cleaning of the Trevi Fountain in 2013.) 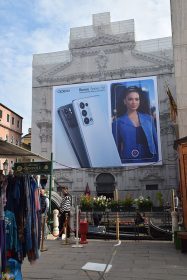 A view of San Moisè, Venice, photographed in 2021. Photo: the author.

The authorities insist that private sponsorship is essential for the protection of Italy’s heritage. In Venice, Keates concedes that there have been some good examples of private companies funding conservation projects, such as the Rialto Bridge restoration by Diesel, for which most of the scaffolding was wrapped with a printed image of the bridge underneath. ‘But I don’t think that is any justification for placing advertising on the front of historic buildings,’ he says. ‘To put really ostentatious, really in-your-face publicity on the front of historic buildings is not the way to go about it.’Lately, with cultural budgets slashed in the fallout from the pandemic, the municipal council in Rome has been actively seeking corporate sponsors once more. It has reached a two-year deal with Confindustria, a national association of Italian companies, which will help businesses engage in sponsorship deals. Companies providing funding will be permitted to display their logos on-site, which has already raised concerns among some heritage experts. Speaking to a reporter for Bloomberg, Christer Gustafsson, vice-chairman of an expert panel that awards the European Heritage Label to heritage sites of merit, warned, ‘The historic dignity of the monuments must be fully preserved without transforming them into mere backdrops for commercial advertisement.’

A possible solution, according to Keates, would be to allow private companies to advertise using more subtle methods: hosting events in the spaces, for example, or ‘in the form of actual achievements or things that they do’. Alternatively, a ‘discreetly placed’ sign might be more acceptable.

For those chugging past the Basilica of Santa Maria della Salute on a waterbus, it would be impossible not to notice the hazy image of a woman’s jewellery-adorned neck and red lips. Its removal at the end of works will be relief for many, but with monuments in Venice regularly in need of repair, it won’t be long before new advertisements pop up around the city – unless an alternative solution can be found.