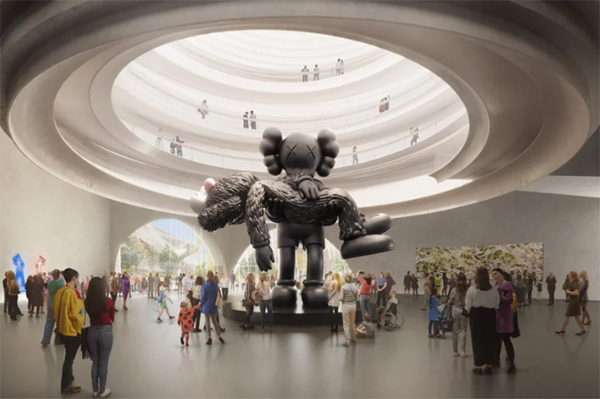 Renders of the design for the NGV Contemporary. CREDIT: ANGELO CANDALEPAS AND ASSOCS / SECCHI SMITH.

The Victorian government is rattling the can among Melbourne’s wealthiest families to fund the National Gallery of Victoria’s new $1.7 billion contemporary gallery.

The design for the new 13,000 square metre building in Southbank was revealed last month, with Australia’s Angelo Candalepas announced as the architect and detailed renders released of what has been dubbed “Melbourne’s Eiffel Tower”.

John Gandel AC and Pauline Gandel AC are in discussions with the state government over funding the NGV Contemporary. CREDIT: JASON SOUTH

However, the state government has not yet determined where the funding for NGV Contemporary will come from, besides a $20 million contribution from the Ian Potter Foundation announced in December.

The Gandel family has confirmed it has been in discussions with the government about funding the huge cost of the gallery, while the Myer family is understood to also be considering a bequest.

The scale of the expected donations would likely dwarf any previous philanthropic contributions by rich lister families.

John and Pauline Gandel made their money through shopping centres and own half of Chadstone Shopping Centre, placing Mr Gandel at 14th on the Financial Review Rich List with an estimated $5.8 billion in wealth. 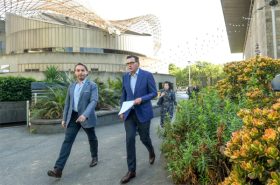 The Gandels have a keen interest in contemporary art and have established a contemporary sculpture garden at Point Leo Estate on the Mornington Peninsula. 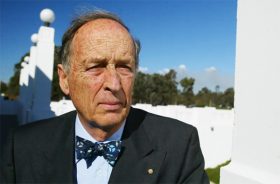 “We are certainly looking at it very closely,” Pauline Gandel told The Age. “We are looking at it and we will wait until we have all the data to decide how we will support it.”

Support from the Gandels is likely to be linked to a children’s area at NGV Contemporary, similar to the children’s gallery the family funded at Melbourne Museum, and the children’s quarter at the State Library.

“We would be interested in doing something with children there”, Mrs Gandel said of NGV Contemporary.

Vedran Drakulic, who heads the Gandel Foundation, said the family’s thorough investigation of the project was consistent with their “hands-on” philanthropy model.

“I want to see what is happening and how it is being used,” Mrs Gandel said. 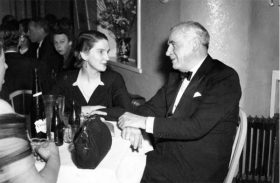 Sir Keith and Lady Elisabeth Murdoch in 1952. The Murdoch family has had a longstanding connection with the NGV. CREDIT: FILE.

The Myer family’s wealth also comes from retail, via the eponymous Myer chain of stores, although the family has diversified into property and other investments over the years.

The family has grown to include the Gantner, Shelmerdine, Baevski, Southey and other branches, and its investments are managed through the Myer Family Office.

The family has a long tradition of philanthropy and connection to the arts, with the Arts Centre’s music bowl named after family patriarch, Sidney Myer.

Baillieu (Bails) Myer, who died earlier this year at the age of 96, was an emeritus trustee of the NGV and the Myer Foundation, a charitable trust set up in the family’s name, which has distributed more than $300 million since its inception in 1959. 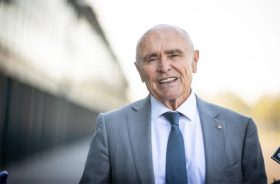 Sidney Myer’s daughter Neilma Gantner, along with her son Carrillo and brother Baillieu Myer, established The Gantner Myer Collection of Australian Aboriginal Art. Much of the multimillion dollar Indigenous art collection was donated to Museums Victoria and the Shepparton Art Museum.

The Myer family declined to comment on whether its members were in discussions about funding NGV Contemporary.

Leonard Vary, chief executive officer of the Myer Foundation and the Sidney Myer Fund, said he did not comment on potential future philanthropic donations.

The government first announced the NGV Contemporary four years ago and one political insider, who did not want to be named, said the latest flurry of announcements showed the government had a major donor lined up.

“There is no way the government would have released all those detailed [architectural] renders without having the funding sewn up,” they said. “It’s coming from one of Melbourne’s wealthiest families.”

Other possible donors include the Murdochs, the Littles, the Foxes and the Smorgons.

The Murdoch family has a long history with the NGV, with media magnate Rupert Murdoch’s father, Sir Keith Murdoch, appointed chairman of trustees in 1944.

Sir Keith was instrumental in the choice of the site of the NGV, across Princess Bridge, “due to his conviction that a new art gallery and cultural centre at the entrance to the city” was fundamental to Melbourne’s future.

His wife, Dame Elisabeth Murdoch, was the first woman to sit on the NGV’s council of trustees in 1968 and, in 1982, she endowed the NGV with a fund to commission tapestries to hang in the Great Hall of the Gallery.

A spokesperson for the Murdoch family said while the family were media partners for NGV Contemporary through their newspapers and radio station, they were at this stage not financially contributing to the new gallery.

Graham Smorgon, of the Smorgon Steel dynasty, said as far as he was aware, the Smorgons were not contributing to the gallery. Philanthropist and transport magnate Paul Little said he had “no comment” when asked about potential support for the gallery.

“You will expect that there will be a philanthropic contribution provided for a project of this scale and breadth, and the philanthropic sector has a great tradition of supporting these sort of projects in the past,” he said. “But it’s really early days, we have quite a bit of work to do to try to work out who [contributes] and how much.”

Mr Pearson said he was not personally in discussions with the Gandel or Myer families about funding the NGV Contemporary.

“I’m not aware of specific names of who people are speaking to at this stage,” he said. “We have a very strong philanthropic base here in Melbourne and this is a very exciting project and no doubt conversations are taking place around the town but – in terms of the specifics and in terms of who and what they might do and what they might fund – it is too early to work out.”

Mr Pearson would not say how much of the outstanding $1.68 billion needed to come from philanthropy.

“I think with these things I’m mindful of not signalling or telegraphing our punches as it were,” he said. “We would welcome a philanthropic contribution to this project.”

The NGV itself is remaining tight-lipped on how the gallery will be funded, directing all queries towards the state government.

The gallery launched a Campaign for Contemporary Art in 2014 to build up its collection of contemporary art to the point where it could fill a new gallery.

The campaign provided that donations of $1 million or more would be held in a dedicated named fund where the donor is acknowledged in perpetuity.
The naming rights for a wing of the NGV Contemporary are likely to be worth significantly more.