You are here: Home » Articles filed under: 'News' » Article: 'Victoria Cross won by Irishman to be'

Victoria Cross won by Irishman to be

July 31st, 2019 | Browse other: News. | Tagged with: Mark O’Meara was the only Irishman to win a VC while in the Australian army, Victoria Cross won by Irishman | 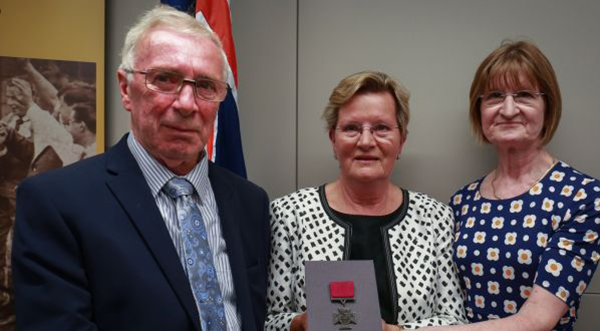 Bill O’Hara and his cousins Bridget and Noreen O’Meara with the Victoria Cross medal awarded to their great-uncle Mark O’Meara. Photograph: Crispin Rodwell.

The only Victoria Cross won by an Irishman in an Australian army uniform will go on display from Friday at the National Museum of Ireland in Collins Barracks.

The repatriation of Mark O’Meara’s medal needed an act of parliament to leave Australia and is on loan to the National Museum for a year.

O’Meara was born in Lorrha, Co Tipperary, in 1885. He emigrated to Australia in 1912, where he worked as a wandering labourer until joining the Australian Imperial Force in 1915.

He was wounded three times during the first World War. O’Meara won a Victoria Cross in August 1916 during the worst days of the Battle of the Somme, when he went out innumerable times to rescue men wounded in no man’s land.

Usually, a Victoria Cross is won for one significant act of gallantry, but his comrades testified time and again to O’Meara’s extraordinary bravery. 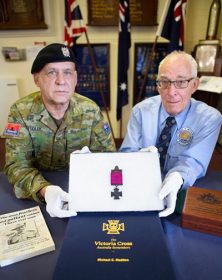 The citation for his VC, as published in the London Gazette, reads: “He showed throughout an utter contempt of danger, and undoubtedly saved many lives.”

The medal was unveiled on Thursday night at the Australian embassy in front of invited guests including relatives of O’Meara.

His great-niece Noreen O’Meara from Tunbridge Wells grew up with stories of O’Meara – her father Martin was named after him.

“We had his photograph on the mantlepiece,” she said. “His story was quite well known in Australia, but not well known in Ireland. It’s a life-long ambition for all of us to see the Victoria Cross to come back to Ireland. Sadly my father is not around to see this happen. It would have made him very happy.”

The Australian ambassador to Ireland, Richard Andrews, said the repatriation of the medal was in recognition of the close historical ties between Ireland and Australia.
Positions Vacant » View All
» Senior Cleaner – MAGNT
» Exhibitions Coordinator – MAGNT
Latest News » View All
AAH NRI Roadmap exposure sub sees gaps
incl HAAS, research excellence & integrity Read more.
AIATSIS to open Alice Springs engagement
& digitisation centre with NT Govt support Read more.
Eric Gill’s Prospero & Ariel at the BBC
- judging the past & Ditchling Museum Read more.
Art attack – when vandals strike
- a glimpse of past causes & art vandalism Read more.
A letter to MoAD’s visitors & friends
& road to recovery after arson attack Read more.
Top +
Council of Australasian Museum Directors, c/o Ms Daryl Karp, Museum of Australian Democracy at Old Parliament House PO Box 3934 Manuka, Australian Capital Territory 2603 Australia, © CAMD 2022
Copyright: All information and resources provided on this website remain the copyright of the Council of Australasian Museum Directors. Permission is granted for viewing and downloading for personal and not for profit purposes. Those wishing to reproduce any materials for commercial, educational or other uses are requested to contact us.
Disclaimer: The content of this website is provided for information purposes only and is not intended as a substitute for professional advice. No claim is made as to the accuracy or authenticity of the content of the website. The Council of Australasian Museum Directors does not accept any liability to any person for the information or advice (or the use of such information or advice) which is provided on this website. The information on our website is provided on the basis that all persons accessing the site undertake responsibility for assessing the relevance and accuracy of its content. No responsibility is taken for any information or services which may appear on any linked web sites. Hostgator.
.