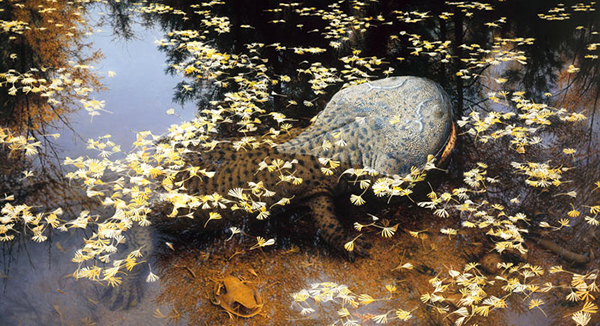 A prehistoric monster amphibian that looked like a crocodile and was the size of a car has joined the likes of the Leadbeater’s possum, the helmeted honeyeater and gold as an official emblem of Victoria.

The four-metre Koolasuchus cleelandi had dozens of ridged fangs for piercing prey and two-inch tusks growing from the roof of its mouth – and following a public vote the predator is now Victoria’s State Fossil Emblem.

Around 11,500 Victorians voted in Museums Victoria’s poll to select the fossil emblem with Koolasuchus cleelandi beating other fossils unique to the state including a 25-million-year-old whale and one of the first plants to live outside water that dates back 400 million years.

Koolasuchus cleelandi, first discovered in 1978 near San Remo on Bunurong Country, is on permanent display at Melbourne Museum.

Fossils of Koolasuchus have only been found at beaches and coves in South Gippsland. Resembling something between a huge salamander and a crocodile, Koolasuchus cleelandi lived in the rushing rivers that separated Australia and Antarctica during the Cretaceous period.

Sharing the land with dinosaurs including the armoured ankylosaurus, the giant amphibian ate small dinosaurs, turtles and fish. Due to Victoria’s climate, the Koolasuchus was able to survive here for about 50 million years after all its relatives had died off, before eventually succumbing to extinction 125 million years ago.

The species was named after fossil collector and educator Michael Cleeland who in 1990 found the jaw that became the holotype of the species, and Melbourne Museum research associate Lesley Kool, who spent months preparing the specimens. Koolasuchus is also something of a play on words as the species lived in a cool environment when Victoria was deep in the southern polar circle.

The Koolasuchus cleelandi is part of Melbourne Museum’s 600 Million Years exhibition that showcases the origin of life in Victoria through fossils, models, animatronics and animations.