May 23rd, 2019 | Browse other: News. | Tagged with: Lisa Reihana in Pursuit of Venus [infected], Reinterpreting First Contact in the Pacific | 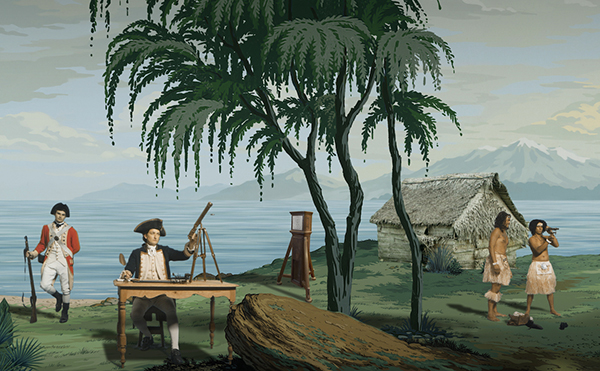 Lisa Reihana, detail of “in Pursuit of Venus [infected]” (2015–17), 64-minute, multi-channel video installation (image courtesy the artist and New Zealand at Venice, with support of Creative New Zealand and NZ at Venice Patrons and Partners).

James Charisma, A Video Challenges a Colonialist Narrative by Reinterpreting First Contact in the Pacific, Hyperallergic, 8 May 2019

In Hawaii, Lisa Reihana presents her video alongside the original French wallpaper the New Zealand artist was inspired by — and is challenging.

HONOLULU — Google “the death of James Cook” and the first result is an article on the History Channel’s website. It loosely describes the death of British Captain James Cook in the Hawaiian Islands in 1779 as a murder committed by the people of Hawaii after negotiations over a stolen cutter vessel collapsed between Cook and Kalaniopuu, the ruling chief of the Island of Hawaii. According to History.com, a mob of angry Hawaiians descended on Cook and his men, overwhelmed and killed the captain.

Meanwhile, written accounts and eyewitness observations by John Ledyard — the only American traveling with Cook’s party not loyal to the British Crown — as well as subsequent research by later historians, including Ralph Kuykendall, Glyndwr Williams, and Lynne Withey, describe Cook’s death as a result of his attempt to hold Kalaniopuu hostage as a bargaining chip. Cook’s efforts to kidnap the chief drew a crowd of thousands to the beach in Kealakekua Bay on Hawaii Island; a melee ensued between the British Marines and the Native Hawaiians, resulting in the deaths of Cook, four marines, and dozens of Hawaiians. Cook’s body was taken and ritually disembowelled, with the bones cleaned and preserved in accordance with Native Hawaiian funeral rituals of the time, a practice normally reserved for chiefs and respected elders. Some of the bones were eventually returned to Cook’s crew for a burial at sea. “They were committed to the deep with the usual military honors,” Lieutenant James King wrote in a journal entry. “What our feelings were on this occasion, I leave the world to conceive[.]”

So much of Cook’s voyages to Hawaii, as well as to New Zealand, Tahiti, and throughout Oceania, have been left to the world and later generations to conceive, and often manufacture. Some 25 years after the captain’s death, French wallpaper and fabric company Joseph Dufour et Cie collaborated with designer and illustrator Jean-Gabriel Charvet to produce a 20-panel set of decorative wallpaper inspired by Cook’s travels across the Pacific, as well as similar expeditions by Louis-Antoine de Bougainville and Jean-François de Galaup, comte La Pérouse. The result, “Les Sauvages de la Mer Pacifique” (1804–1805), presented a neoclassical vision of a fantasized Pacific that was one of the first panoramic wallpapers of its kind, stretching over 10 meters and requiring more than 90 workers to hand paint, stencil, and print using thousands of individual woodblocks. A 48-page promotional prospectus was issued with the wallpaper that explained how Dufour’s objective was “to delight the imagination without taxing it,” through a series of tropical vignettes set everywhere from Vancouver Island to French Polynesia to Papua New Guinea. The various Indigenous peoples depicted are largely light-skinned, with draping costumes drawn from Greco-Roman styles, and without many of the piercings and tattoos that were prevalent during the period. “We have permitted ourselves to suppress the absurd parts of a picture, which is only intended to offer pleasant objects to the eyes of the public,” Dufour noted in the prospectus. The wallpaper was intended for an audience of armchair travelers, offering a visual array of sensationalized images and tropical scenes for eager eyes back in Europe.

When Maori artist Lisa Reihana first encountered “Les Sauvages de la Mer Pacifique” at an exhibition at the National Gallery of Australia in 2005, she was fascinated and perplexed. “I found the wallpaper very confusing. It was a representation of Pacific people which looked so foreign to me,” recalled Reihana in an interview with Hyperallergic. What she found most bizarre was the decision to include, amongst idyllic scenes of “paradise,” the death of Captain Cook. If Charvet and Dufour could reframe history by picking and choosing narratives from the Pacific in their artwork, why couldn’t she?

Over the next decade, Reihana researched Cook’s voyages in Oceania, Louis-Antoine de Bougainville’s travels to Tahiti in 1767, and other European expeditions throughout the Pacific to create a reimagining of “Les Sauvages” in the form of a scrolling, panoramic video. But instead of cherry-picking scenes to present the traditionally idealized Western view of contact, Reihana endeavored to present both sides. The work “in Pursuit of Venus [infected]” (2015–2017) is a looping 64-minute installation that casts a variety of actors and Indigenous Pacific cultural practitioners — some chanting or dancing, others relaxing, painting, studying, or arguing — in 70 tableaux that may or may not have taken place between European explorers and peoples in Hawaii, Australia, New Zealand, Tahiti, Tonga, Palau, and elsewhere across Oceania.

Reihana represented New Zealand at the 2017 Venice Biennale with “in Pursuit of Venus [infected],” and the piece is at the heart of a new exhibition, Lisa Reihana: Emissaries, currently on display at the Honolulu Museum of Art — alongside the original Dufour wallpaper, which is part of the museum’s permanent collection. “Visitors can circulate between the two pieces and for people who haven’t seen [“Les Sauvages”] before, they get to encounter it as a contemporary artwork,” observed Reihana.

In front of Dufour’s wallpaper, the artist installed antique nautical monoculars, seemingly to get a closer look at the artwork. Instead, they only reveal absurdist images; for example, a ceremonial headdress not meant to be worn has been photoshopped awkwardly onto someone’s head, and a European compass lists Nootka Sound as a literal direction. It’s a thinly veiled metaphor for Western tools with a literal Western viewpoint.