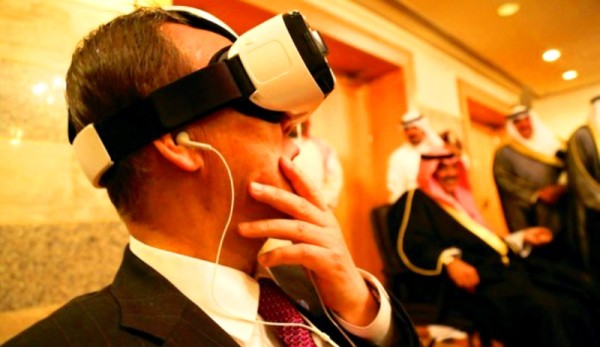 At the Zabludowicz Collection in London last autumn, the Canadian artist Jon Rafman created Sculpture Garden (Hedge Maze) (2015), an artificial labyrinth dotted with strange primal sculptures. At its centre was the Oculus Rift, the headset attracting giddy anticipation ahead of it hitting the general market later this year. It is easy to understand why. Putting it on, you were swept upwards into a the canopy of trees surrounding an immersive, imaginary sculpture park; as you glided upwards, you genuinely felt weightless. Virtual reality (VR) has become very real—and artists are using it to powerful effect.

Rafman says that “as a kid I assumed it would become part of our daily reality a lot sooner”. He has explored various virtual spaces in his art, fr om Google Street View to video games and Second Life, the virtual world created by Linden Lab in 2003. “I have always been interested in immersive worlds,” he says. “I knew that I wanted to do a VR project at the moment that it became feasible to.”

Many artists and designers across numerous creative platforms clearly share his enthusiasm and there is a palpable sense that this year is a breakthrough moment. As Carl Goodman, the director of the Museum of the Moving Image in New York, said when announcing VR360, a programme of VR-related events and exhibitions at the museum this year: “Virtual reality has been ‘just around the corner’ for 25 years. Now we’ve turned that corner and 2016 will be the year when VR transitions fr om a set of technologies to a true moving image medium.” Lauren Cornell, the curator and associate director of technology initiatives at the New Museum in New York, which will commission three artists to make works using VR this year, as well as hosting a conference on 5 March, also senses a shift. “It has always been imagined, and now it’s finally possible to realise it, so it is something that’s exciting artists,” she says. “I think 2016 is going to be a big year of people testing it out and experimenting with it.”

Although VR works have existed in various forms for years, the availability in 2013 of the Rift and its development kit, made by Oculus VR (now owned by Facebook), prompted a major shift. “Those development kits were made very widely available to film-makers, artists and people working broadly in the creative industries,” says Conrad Bodman, who curates digital programmes at the British Film Institute (BFI). “Having access to that particular toolset for creative people has been important.”

Other companies are also in on the act. Google has created Google Cardboard, a low-cost viewer that is indeed made of cardboard, into which you place your smartphone, with various compatible VR apps. The Samsung Gear VR headset also works by using a slotted-in smartphone. Meanwhile, Sony is developing the PlayStation VR headset and HTC will unveil the Vive, both later this year.

As yet, though, little has been experienced beyond the tech industry, and there are cautious voices among curators. “A lot of the hype is coming fr om the drive towards the release of VR to a consumer market but everyone in the industry is nervous about overselling it; they don’t want another Second Life failure on their hands,” says Ben Vickers, the curator of digital at the Serpentine Galleries in London’s Kensington Gardens. He cites the opening of a virtual Swedish Embassy in Second Life, which is “now going down as an embarrassment in history”.

A key factor in early VR works has been the enhanced emotional quality in the immersive world. Chris Milk, the film director, who is one of the leading exponents of the new technology and founded the VR production company Vrse, has spoken of wanting to make his VR films “empathy machines”. His film Clouds over Sidra, made with Gabo Arora, is perhaps the archetypal film of this kind. Commissioned by the United Nations, it focuses on the daily life of Sidra, a 12-year-old Syrian refugee in Jordan’s Za’atari refugee camp. “That whole sense of the eyewitness that VR can bring is quite visceral,” Bodman says. “You can see it working very well for charities who want to make people aware of global issues and crises.”