You are here: Home » Articles filed under: 'News' » Article: 'Voice of activism' 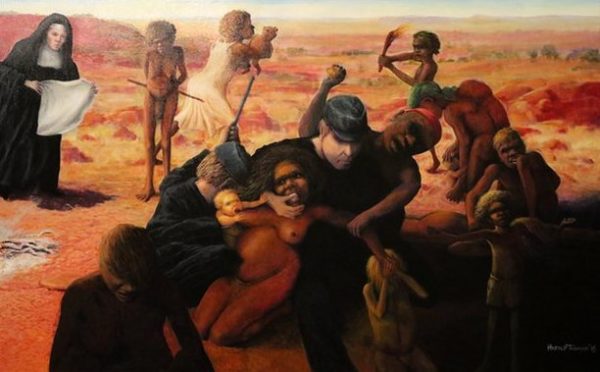 An art award that responds to contemporary issues offers more than financial rewards for Indigenous artists.

Last week, Harold Thomas was named winner of the Telstra National Aboriginal and Torres Strait Islander Art Awards (NATSIAA) for a painting that cuts to the core of the Stolen Generation story.

He told ArtsHub: ‘Some people were shocked and they had to reorganise their thoughts and come back to take a second look.’

It is not the kind of painting that we have been nurtured to expect from Aboriginal and Torres Strait Islander artists by an art market that has been built upon dot paintings and Dreamings.

And, the Telstra NATSIAA has come in sync with that shift of focus.

‘It took 33 years to get their act together. Now it’s like nothing else; there’s such a wide range of work, from desert art to very contemporary stuff. It’s doing its job I think,’ said Thomas.

A Luritja and Wambai man, aged 69, Thomas knows that journey well. He was a finalist in the first NATSIAA in 1984, then known as the Aboriginal Art Award, with what he described as a ‘conservative painting’ on paperbark from his wife’s country.