You are here: Home » Articles filed under: 'News' » Article: 'VR will break museums' 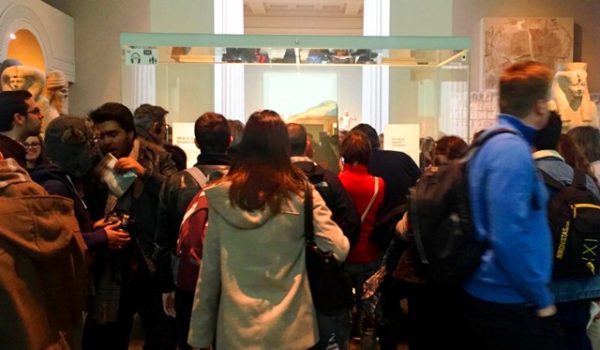 Viewing the The Rosetta Stone at the British Museum. Source: Medium.

The first sign came with the Oculus Rift DK2 last year, when I discovered that consumer virtual reality could finally replicate a sense of physical presence in a digital world.

The second came last month, when I visited the British Museum’s Sicily exhibition.

The exhibition was perfectly fine, a well-curated narrative of the Greek and Norman periods of Silician history — the greatest hits, if you will. But here’s the thing: I couldn’t see shit.

It was a Sunday afternoon, only four days after it opened, so of course it was busy. I queued to read labels. I queued to study maps. I queued to peer over shoulders to gawp at shiny jewellery. And even after all that queuing, I only got to see each object for a few seconds — lingering any longer just made me feel guilty.

Perhaps, I wondered, there was a problem with the layout of the exhibition? Maybe they’d placed too many objects in corners, too many long cases against walls? But that wasn’t it. The designers did the best they could, given the constraints. And on reflection, I realised that I’d spent just as much time in other popular exhibitions queuing to see stuff.

Let’s be clear, overcrowding is a problem borne of success: 6.8 million visitors per year of success, to be exact. But it’s a problem nonetheless.

So to answer the inevitable question, “Why would you want to look at ancient objects in virtual reality when you could see them in real life for free?” I say, “Because even in the best museums in the world, I can’t see shit.” Compared to that very imperfect reality, virtual reality is an improvement.