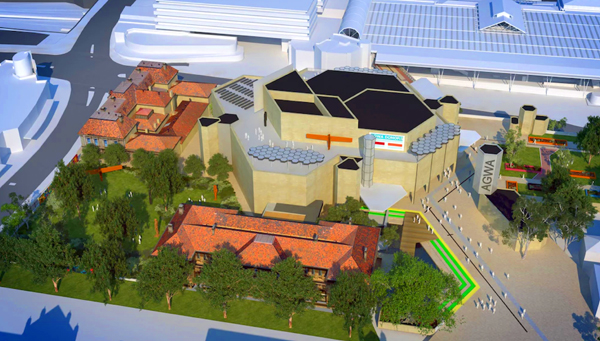 Joshua Zimmerman, Plans for Art Gallery of WA to get $20 million transformation, The West Australian, 9 September 2017

A 300-seat rooftop cinema, restaurants, bars and private function space are all part of $20 million plans to transform the Art Gallery of WA into a thriving hub in the heart of Northbridge.

Culture and Arts Minister David Templeman today outlined his vision for the gallery, which the State Government committed to hand $10 million in Thursday’s budget.

“This is a landmark project that delivers on an election commitment to activate a space here on top of the Art Gallery of WA that has huge potential,” he said.

“There is 1800sqm of space here and it will be a centrepiece part of our cultural precinct.”

Mr Templeman expects corporate partners to match the State Government’s funding for the project, which he hoped would be completed by 2020 to coincide with the opening of the upgraded WA Museum.

“The first step is to get a feasibility study under way and start imagining what can happen here,” he said.

“There are already ideas that could work like a 300-plus seat outdoor cinema, restaurants and there is also space that has potential for bars and private and public functions.

“I think the potential is massive and you’ll find that corporate WA will want to be involved in this because they’ll see how much potential this place has.”

Mr Templeman said creative industries were an essential part of Perth’s modern economy that would only grow in the future.

“Activating this space it will have a ripple effect right through Northbridge and Perth City,” he said