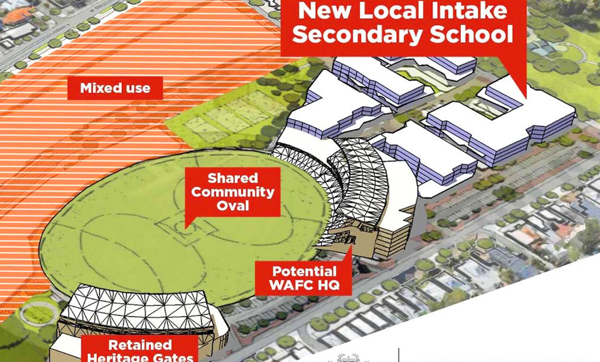 An artist’s impression of what the new school plan will look like. Picture: WA Government.

Perth Modern School parents, students and alumni have won their fight to keep WA’s most gifted students at the historic school.

The State Government has announced it is backing down on its election pledge to turn Perth Modern into a regular school and move its students to a high-rise school in the city.

After community backlash to its Education Central policy, the Labor Government revealed it will instead build a new secondary local intake school at Kitchener Park.

The new school will form part of a wider redevelopment of the Subiaco area and will include housing.

Last month, more than 100 parents and past and present Perth Modern students campaigned on the steps of Parliament to save the school.

Parents argued a move to the city would affect the health of students because the only outdoor space would be on the roof.

“There won’t be trees, there won’t be little quiet spots … so and Perth Modern in its Subiaco site right now is really important,” parent Sue Coltrona said.

Premier Mark McGowan said the Government had listened to the community’s concern.

“Education Central was an ambitious project, however given our timeframe constraints to deal with student enrolments and some concerns raised by the community, we have acted decisively in the best interests of all Western Australians,” he said.

“Our new plan to transform the Subiaco Oval site into a community hub will create thousands of jobs and deliver a vibrant neighbourhood on the edge of the CBD.”

“This school addresses the need for a secondary school in the booming inner city suburbs, rather than in the coastal area where population growth is much less,” she said.

“The City Beach site, announced by the previous Liberal National Government, was always the wrong site for a secondary school to take the pressure off Churchlands Senior High School and Shenton College.

Perth Modern School is not part of the new precinct and will remain on its current site on Roberts Road as the State’s only fully-selective academic school.

The Metropolitan Redevelopment Authority will work with both the City of Subiaco and the local community to develop the precinct.

The heritage-listed gates and playing surface of Subiaco Oval will be retained and some grandstand space will be offered to the West Australian Football Commission.

The State Government will work with Scitech to facilitate its relocation to new accommodation.