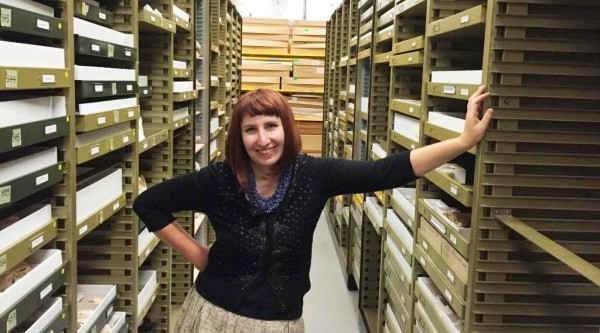 Western Australian Museum research scientist and taxonomist Dr Amber Beavis has been named as one of Australia’s ‘Top 5 under 40’ science voices, taking one of five coveted nationwide placements in a new ABC Radio National Scientists in Residence media program.

“Amber was one of 12 short-listed candidates who travelled to Sydney last month to pitch their ideas for effective communication of science to a panel of experts,” Mr Coles said.

“As the only WA scientist and the only museum researcher to be selected in the nation’s Top 5, she will be flying two flags when she takes part in the Scientists in Residence 10-day media program at the ABC’s Radio National studios.

“We are, of course, extremely proud of Amber and her work is at the forefront of science communication.”

Dr Beavis specialises in arachnology research.  Her work at the WA Museum is focussed on taxonomy, which is the classification and naming of new species, and identifying new species as part of understanding Western Australia’s incredible biodiversity. She is also a passionate science communicator who already has her own science show on Perth radio station RTRFM.

“Having worked as a science communicator for two decades now, I feel very privileged to work for the WA Museum as I believe museums are one of the few really democratic avenues for teaching and revealing science,” Dr Beavis said.

Dr Beavis said being able to take part in ABC Radio National’s Scientists in Residence program later this year is a great opportunity to help increase her ability to communicate science more effectively.

“I’m incredibly excited to be taking part in the 10-day media program,” she said.

“This is a real opportunity to help make science more accessible, less intimidating, and to engage people and get them to ask questions that science does not yet have answers to, and that is so important to help grow the next generation of science thinkers.”