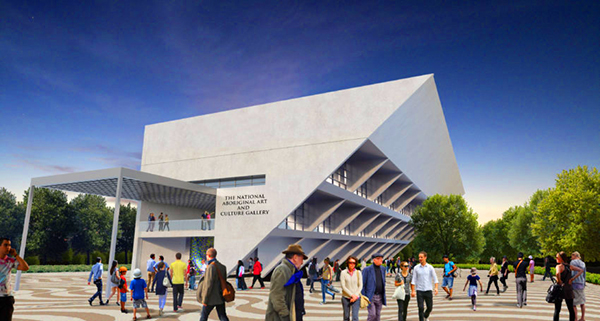 A render of the Marshall Government’s proposed “National Aboriginal Art and Culture Gallery” at Lot Fourteen.

The State Government insists that Adelaide is the “logical” home for a national gallery showcasing Aboriginal and Torres Strait Islander culture, as a rival bid to build an Indigenous cultural centre in Perth gains traction.

The Western Australian Government last week announced it would spend $2 million planning for an Aboriginal Cultural Centre in Perth to fill what the state’s Treasurer Ben Wyatt described as a “great cultural missing link” in Australia.

According to Wyatt, the proposed gallery would “bring the Aboriginal story to the world and importantly tell that story to Australians” by showcasing artefacts and pieces from across the state.

It is the third such centre to be flagged in Australia, following a similar Northern Territory bid to build a national gallery in Alice Springs.

Progress on that gallery has stalled after the NT Government failed to reach a consensus on the preferred location or receive Commonwealth funding.

Meanwhile, the South Australian Government has finalised its business case for a $150 million state and federal-funded Aboriginal Cultural Centre at Lot Fourteen, to complement Tandanya National Aboriginal Cultural Institute and house what the SA Museum describes as the “world’s largest” collection of over 30,000 Indigenous Australian artefacts.

A SA Government spokesperson said the business case, which is long-overdue after an extended consultation with the state’s Aboriginal communities and yet to be made public, would be discussed at a cabinet meeting in the coming weeks.

“Our Aboriginal Art and Cultures Centre will be an institution of world significance and will serve to tell the incredible story and unique cultures of our nation’s First Peoples,” the spokesperson told InDaily.

InDaily reported last year that the Adelaide gallery had dropped the word “national” from its title amid competition with the Northern Territory over plans to build what both jurisdictions claim will be Australia-first institutions.

Premier Steven Marshall later conceded that there was “further consultation that’s required and approvals needed at the federal level when you’re going to start naming things as national centres and we just thought it wasn’t necessary”.

A spokesperson for WA’s Aboriginal Affairs Minister told InDaily there would be “national benefit” to building “complementary” galleries at multiple locations across the country.

The spokesperson said the proposed WA gallery, which is yet to receive Commonwealth funding, would only focus on Western Australian Aboriginal culture – despite Wyatt saying the gallery would also tell the broader story of Aboriginal culture across the country.

“This was further confirmed in February 2020 with Infrastructure Australia listing the opportunity of a national program of Indigenous art and cultural centres on the infrastructure priority list as a national priority initiative.

“Alignment of projects with priorities within the Infrastructure Priority List positions WA well in seeking collaborative funding on these initiatives.”

Meanwhile, the South Australian Government insists it is on track to start constructing the Aboriginal Cultural Centre at the old Royal Adelaide Hospital site next year, with an opening date scheduled for 2023.

“Work is continuing on defining the strategic direction, curatorial vision and functional and spatial requirements of the Centre and this will be used for the design development phase,” a government spokesperson said.

“The project schedule has not been affected by COVID-19.”

A report summarising findings from the Government’s consultation with Aboriginal communities and other cultural institutions – published in November – recommended that the Cultural Centre by called a “centre” as “for many people, the word ‘museum’ or ‘gallery’ mean different things”.

It is anticipated that the SA Museum’s mostly-hidden collection of Aboriginal cultural artefacts  – 95 per cent of which is currently kept in a leaky storage shed – will form the centrepiece of the new centre, which aims to “bring Country to life” through interactive displays and exhibition spaces.

Marshall, who holds the Arts and Aboriginal Affairs portfolios, announced he would build the “Australian National Aboriginal Art and Culture Gallery” ahead of the 2018 state election, at the time saying the institution would be “the jewel in the crown” of the Liberals’ plan for the former Royal Adelaide Hospital site.

The Federal Government committed $85 million and the State Government contributed $65 million to build the centre as part of a city deal signed last year.