More than 1000 people were up at the crack of dawn in Waitangi this morning to witness the opening Te Rau Aroha, a new museum honouring Māori who fought in conflicts here and overseas.

Built with money from the Provincial Growth Fund, Te Rau Aroha has been a year in the making. When doors finally opened today, many people were moved to tears.

Among them was Robert “Bom” Gillies, one of only two surviving members of the 28th Māori Battalion, who received a special welcome alongside Willie Apiata VC.

Prime Minister Jacinda Ardern acknowledged their service and the sacrifices all Māori soldiers made when they enlisted.

“There are generations of Māori leaders – sons, brothers, uncles and fathers – who are lost to war. Here at Te Rau Aroha we acknowledge the commitment and sacrifice made by Māori in the hope for a more equitable future,” she said.

The official opening of Te Rau Aroha, a museum at Waitangi honouring Māori who have fought in conflicts in New Zealand and overseas. Photo: RNZ / Eden Fusitu’a.

“Here we will honour their memory. It is a tribute to a past that we must not and will not forget.”

“In Te Rau Aroha we honour the spirit of all those who, without the pressure of conscription, willingly took up arms for their country, many making the ultimate sacrifice.

“We acknowledge the challenges Māori faced in asserting their rights to equality in military service, especially during the First World War.”

It was the Ngāti Porou leader and Māori MP Sir Apirana Ngata who said in 1940 that Māori involvement in war was a necessary price to pay to achieve equality and joint-citizenship with Pākehā. 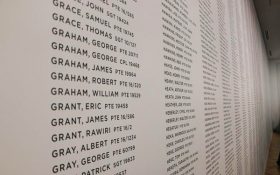 A list of names at Te Rau Aroha, a museum at Waitangi honouring Māori who have fought in conflicts in New Zealand and overseas. Photo: RNZ / Eden Fusitu’a.

War came at a great cost for Māori, with the casualty rate for Māori Battalions nearly 50 percent higher than all other New Zealand battalions.

Rawson Wright, the president of 28 Māori Battalion A company association, said seeing Te Rau Aroha come to life was both humbling and heartbreaking.

“I stood by my father, Rawson Ross Wright, and he’s on the end wall,” he said. “As people were coming they were chatting away and you could see the emotion, the tears of sorrow, the tears of joy and excitement.”

One of the museum’s main exhibits is Te Whare Maumahara, a place to remember. Portraits of men from Northland who served in the Battalions’ A company line two of the rooms walls. 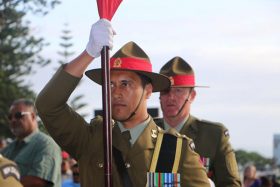 Members of the defence force at the opening of Te Rau Aroha. Photo: RNZ / Eden Fusitu’a.

One of those men is Solomon Tipene, the father of Waitangi National Trust chair Pita Tipene.

“He sort of talked tongue-in-cheek that he had toured the world and been to 24 different countries, and then he said that he saw those 24 countries in a slit through a carriage in a train,” Pita Tipene said.

“I just hope that this museum will be a place where our people can come and talk with others and learn about their own direct connections to the Māori Battalion and any conflict for that matter where Māori were involved.” 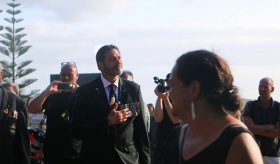 Sergeant Leigh Albert said their legacy paved the way for her to join the armed forces too.

“When the Māori Battalion first stood up it was to be considered equal citizens and now I’m a female Māori in a modern day military because of them.”

The name of the museum, Te Rau Aroha, was originally the name given to a mobile canteen truck. It was completely funded by Native Schools and was sent overseas to the Māori Battalion during the Second World War. 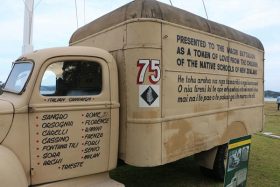 It was there where Māori soldiers gathered to share kai and spend time with one another as they traversed many countries over many months.

The truck travelled across deserts, mountains and rivers, following the Battalion, and still bears the scratches and stains.

“When government found out about it, they decided that it was something they wanted to have happen, they gave us a year to do it, and we did it.”

He said the naming after the canteen truck – which was bought with donations from Māori schoolchildren – was symbolic.

“We wanted a name that was very inclusive, and included all Māori servicemen, and the canteen truck is very symbolic of the effort in World War II from home in particular to look after the soldiers who were away at war.”

The inscription on the side of the truck that notes in te reo Māori the truck was “a token of love from the children of the native schools of New Zealand”, had reportedly brought tears to soldiers’ eyes.

The museum team had been inundated with toanga from whānau around the country as well as being lent some items from Auckland, Te Papa, and Christchurch Art Gallery, McManus said.

The museum team was inundated with toanga from whānau around the country and was loaned some items from Auckland Museum, Te Papa, and Christchurch Art Gallery, McManus said.

Some of the items on display included the sword carried by Te Rangi Hīroa (Peter Buck) and Ralph Hotere’s painting of his brother who was killed during World War I.

At the opening today, Ardern said the truck was considered a taonga to them, and was a fitting name for the new museum.

The museum exhibits featured a whole range of conflicts Māori fought in, but the 28th Māori Battalion held a special place – their stories and faces displayed almost everywhere.

Ardern said their legacy would live on forever. 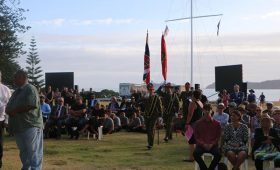 Winston Peters and Governor-General Dame Patsy Reddy also spoke at the opening and a number of MPs, including some from the National Party, attended.

However, Peters said the absence of National’s leader and deputy leader spoke volumes.

“Well, I was astonished that hide nor hair of him nor Paula Bennett were here, given that they are so intrinsically, according to their words, Māori.”

Bridges said National was well represented at the formal event, and he had other priorities, including a stand-up with reporters.

He said his absence was not reflection on the importance, and value, of the museum.

“With a bunch of wasted money projects, this is actually one of the good ones we can think of. But look, I’ve got other things in my schedule and people understand that.”

He said he would be at public events in his home electorate tomorrow, on Waitangi Day.

Work on the Museum of Waitangi started early last year and cost $14.6 million, with funding from the Provincial Growth Fund.

It will open to the public on Friday.